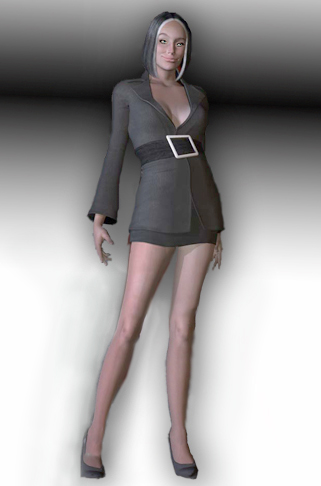 Ms. Giolla joined APEX Labs early on in the company’s history as its first female employee after it was restructured under new ownership. She started out as a lowly laboratory assistant, but quickly worked her way up the corporate ladder. Eventually she was named chief science officer, overseeing all of APEX’s scientific operations and reporting directly to Max Indeks himself.

Her current position is primarily a supervisory role and she doesn’t get as much “hands on” experience as she used to, but occasionally she sneaks off to her own personal lab to work on side ventures.

Belinda rubs many within the organization the wrong way by treating non-management personnel like second-class citizens. She looks down upon all the “geeks” and “nerds” around her, specifically her fellow scientists and technicians – the backbone of the company.

At the same time, she flaunts her sexuality to get attention and even advance her career. It is rumored that she was the individual responsible for alerting Max to Ted Twiss’s unauthorized experiments. Ted and Belinda worked together on many secret projects, and she was quite envious of his intelligence and favorable standing with their superiors. 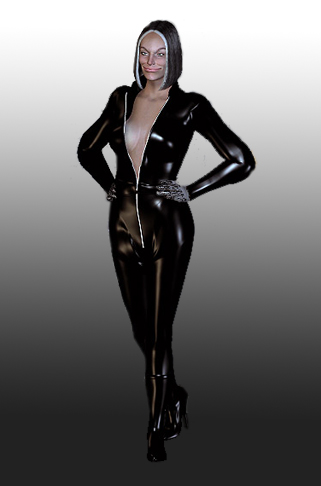 Belinda has developed several unique and kinky sexual quirks over the years. She has grown rather disgusted with men in general and, though she is not above sleeping her way to a promotion, she prefers the company of women. Ted Twiss even at one point was attracted to her, and may still be on some level, a sentiment she initially reciprocated. For a brief time, the two were actually lovers, but when an inebriated Ted confessed his preference of “robot women” over a real woman like herself, she grew spiteful and embittered towards him. Their current relationship is, needless to say, frosty and antagonistic at best.

Belinda was also responsible for using a refitted security droid to kidnap and brainwash the veteran heroine Ms. Metrobay into a dutiful and loyal servant and lover. She went so far as to dress Kelly up as a sexy French maid and force the amnesiac heroine to tend to her every whim.

Belinda discovered Ted Twiss’s plot to convert heroines into mindless human robots and kidnapped and reprogrammed Valient Grrl for herself. She used a first-generation scanner/duplicator to copy the physical and mental characteristics of herself, Ms. Metrobay, and Valient Grrl onto a prototype android body. This gynoid became the personal bodyguard and sex machine she would come to call “Mechana”. Valient Grrl, however, broke free of her control, destroyed her lab, and rescued Ms. Metrobay, actions that the vengeful Belinda has certainly not forgotten.

As manipulative as Belinda is, she is still prone to overconfidence, for she was captured and turned into Sentius’s cyborg slave during a planned invasion of Dr. Twisted’s lair. After Sentius’s defeat she reverted to normal and was apprehended by the Superheroine Squad. After a surprisingly smooth trial she was convicted of kidnapping and sentenced to hard time, and she is currently serving a stretch inMetrobay Prison. 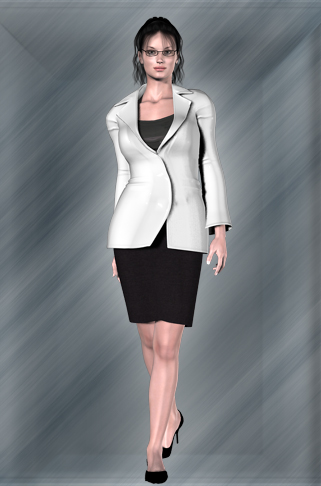 It has recently been revealed that Max wields great influence over Warden Smith via a yet to be detected greentooth earpiece, and that influence may extend to Belinda as well. It is likely that Max may yet have a use for his incarcerated ex-employee and she could re-emerge as a significant threat. This came to fruition recently as a new recruit to the Funhouse, a young officer named Erica Donovan, discovered that Belinda had been having the Warden smuggle in large quantities of APEX technology and had been using jail staff and fellow inmates for her fiendish experiments, of which Erica became just another victim.

Afterward, the heroines Swallow and Bluebird were framed for kidnapping and sent to the Funhouse for Belinda to experiment upon. She promptly used her psycho-slaver machine on Bluebird, turning the stalwart heroine and prudent heterosexual into an obedient, sexual lesbian bent to her fiendish whims. She sadistically toyed with Swallow until she too was thoroughly brainwashed into Belinda’s servile slave.

Belinda’s unethical experiments were discovered when Valient Grrl and Crissy Tanner came to the Funhouse to deposit a criminal, but Crissy wandered off and stumbled in on Belinda running free. Rather than turning her in, however, Crissy offered Belinda a deal: if Belinda could fulfill her dream to make Crissy into a robot, Crissy would give herself to Belinda fully. To sweeten the deal and prove her sincerity, Crissy then lured Valient Grrl into a trap, stripped her of her powers, and allowed Belinda to put Valient Grrl into her psycho-slaver machine. Belinda gleefully brainwashed her hated enemy into her mindless, loving slave, getting her revenge for all the trouble Valient Grrl had cost her before.

Notable Appearances: “Twisted Tales”, “A Day in the Life: Belinda Giolla”, “Forbidden Fantasy”, “Changing of the Guard”, “The Chrome Virus”, “Past Mistakes”