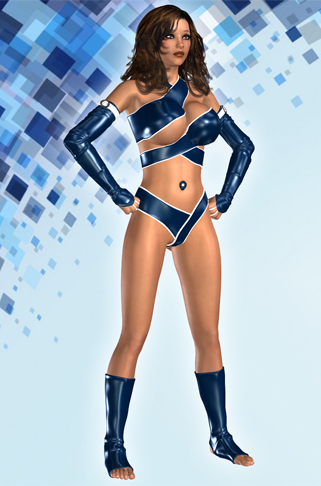 Machine Matriarch stole much of her blueprints from Gilbert Petto and his designs for his dolls, augmenting and enhancing his designs with superior AI and more advanced materials to better blend in among other human beings.

Auto and the others were placed in a contained, artificial testing ground meant to represent normal human environments to better train them for their inevitable takeover. After extensive testing, Matriarch determined that actual human data was needed to compare against her creations and she kidnapped various heroines to see how well they integrated among the machine impostors.

Auto was initially programmed to believe she would be the partner of another heroine, Peregrine, before her sleeper programming would be activated, but a glitch in her system caused her AI programming to advance far faster than her creator ever intended. To her own shock, Auto became self-aware of her existence and saw the logic in her creator’s plan, opting instead to liberate Galatea and free the captive heroes. Rebelling against her “mother”, Auto suffered a devastating blast of feedback that damaged much of her memory, but she emerged knowing full-well that she couldn’t let innocent people suffer and would do everything in her power to preserve life in all its forms.

Auto and Galatea were integrated into the Superheroine Squad, serving as Peregrine’s partner on occasion, though they chiefly reside in the Labs undergoing study that might shed light on their super-advanced AI and origins. While Galatea has settled into her life as Honeydoll’s surrogate sister, Auto is aware she is unique among the other androids, more advanced than even Lisa and Mechana, and far more capable of acting and blending in among other human beings, though she often behaves cold and calculating compared to her “sisters”. While she knows she is not truly human, she enjoys being treated as any other member of the team and enjoying all that life has to offer.