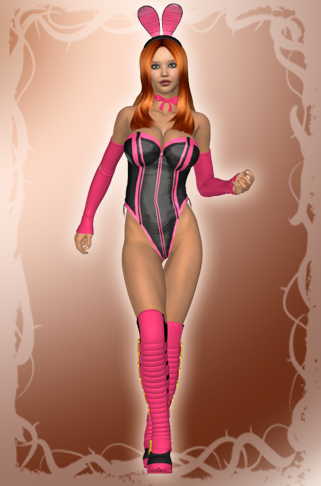 Kara “Four Alarm” Fier was a champion track and field star, specializing in the long jump and hurdles. She won gold twice at the Olympics and was training for a third when she was the victim of a bizarre lab accident. And attempt to measure and record her muscle movements led to an infusion of DNA from one of the experiment’s other test subjects: a black0tailed jackrabbit. The results fused the rabbit’s DNA with Karas, giving her enhanced speed and incredible leaping ability (as well as a super-charged libido). Retiring from the track world, she took up a costume to fight injustice under the name “Blaze Bunny.” She appeared at roughly the same time as Ms. Metrobay, and enjoyed steady (if minor) success as a costumed heroine of the era.
That came to an end when she was captured by the sinister McNorm family and subjected to their statufication process. Blaze found herself on display in their mansion, frozen in stasis for decades. She was freed by Honeydoll during the events of “Prized Displays” and returned to the world to find a Metrobay radically changed. She has yet to decide whether to return to her previous life of crimefighting, or retire to explore this brave new world as a civilian.