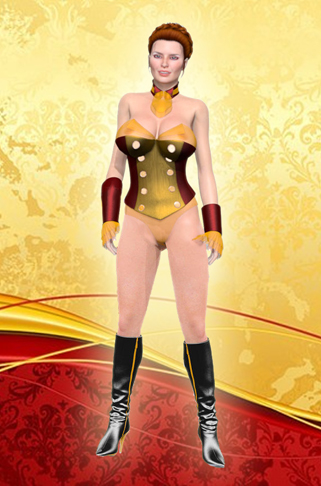 Marie Custer always had a knack for riling up a crowd. Her natural charisma and golden voice made her a popular announcer and pitchwoman growing up, and she spent many years as a daily talk show host for the Daily Metrobay Live podcast.

Seeking more excitement, she grew bored with simply sitting behind a microphone unseen and started taking interest in a career as a game show host and sports announcer, soon becoming a popular face and voice on many reality TV shows and televised contests, including a popular stint as the narrator for the popular “Jock Beach” reality TV show.

Her fortunes ground to a halt, however, when she was caught stealing from her own producers and unceremoniously dropped from her networks. However, she soon was offered a job hosting various underground game shows of different varieties under the patronage of several unscrupulous criminal organizations, such as the Circle of R.O.P.E. and the League of Villains. Her favorite, the annual “Battle of the Babes”, pitted brainwashed heroines against brainwashed heroines, much to her delight.

However, following a disastrous season commissioned by the Ring Mistress, Marie was “punished” for her failure by the Ring Mistress and forcibly converted into an obedient servant, unaware that her patron had used the event to obtain superheroine data and samples necessary for her own takeover of Metrobay.

Notable Appearances: “Battle of the Babes”