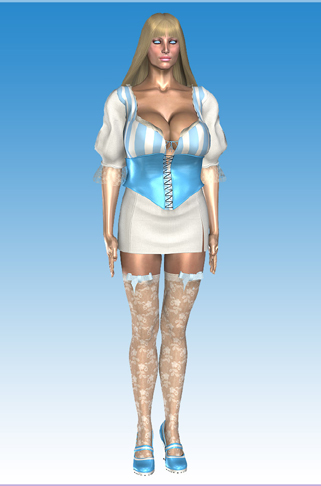 The robotic being known as “MilkMaid” came to be under strange circumstances, even by Metrobay standards. Originally conceived in the brilliant mind of Gilbert Petto, “Lisa” – as she was originally known – started out her short life as a blank android template constructed deep in the basement workshop of Gilbert’s toy store. She was given ‘life’, for lack of a better word, when Gilbert tricked Ms. Metrobay into allowing her physical features to be scanned by Gilbert’s scanner/duplicator machine, falsely believing that the resulting dolls would be children’s toys sold for charity.

What Ms. Metrobay did not know was that Gilbert had been blackmailed into creating a life-sized replica by the fiendish Max Indeks, who intended all along to keep the doll for R.O.P.E.’s sinister purposes. Once Max had brought Lisa back to APEX Laboratories, he and his team of scientists reprogrammed her with the personality traits of four women whom he was subconsciously controlling via his greentooth earpiece inventions. Those women – Vanessa Turner, Marcia Smith, Danielle Jordan, and Ginger Monroe – unknowingly ‘donated’ their traits to the female android so that she may possess the leadership (Turner), discipline (Smith), loyalty (Jordan), and sexual appetite (Monroe) of what Max considers to be the ‘perfect’ henchwoman.

Upon completion of her programming, Lisa’s artificial body was infused with a sliver of Thrallium which should power her systems for many years. The unintended side effects of the Thrallium crystal allow Lisa a certain amount of mind controlling ability, via the synthetic breast milk that she produces or simply being in her immediate vicinity when her powers are active.

Lisa was programmed by Max to assist the Dairy King in his villainous schemes around Metrobay. With her super strong robotic physique she acted as his hired muscle as well as an effective capture and enslavement device should any pesky superheroines come snooping around the Tasty Treats complex. Rechristened as “MilkMaid”, her no-nonsense attitude and strict adherence to her master’s wishes make her a formidable opponent for anyone who may attempt to bring the Dairy King to justice.

She assisted in the capture of several heroines for her master’s fiendish purposes, but was forced to flee alongside him when the milking machine equipment malfunctioned, threatening to flood and destroy their secret lair. The two fled back to his hometown of Hooter County, where she was used to enslave the owners of the Three-Pair Tavern, the famous West triplets, a task that proved easier than expected due to her uncanny resemblance to their sister, Kelly. Dairy King’s attempts at restarting his criminal business was short-lived, however, as the Superheroine Squad tracked him down and arrested him. MilkMaid’s computer brain was rebooted by Silver Satin, reverting to her L.I.S.A. persona and removing her loyalty to the Dairy King. She was then handed over to robotics expert Ted Twiss for study and observation.

Since coming under Twiss’ care, Lisa has undergone a noticeable personality shift. Due to the meddling of Crissy Tanner, Lisa and Crissy swapped bodies, giving Lisa the strange and alarming feelings of being human. She then downloaded some of Ms. Metrobay’s memories and personality traits directly into her own mind, making her even more like her ‘twin sister’. She also used her hypnotic powers to suggest to Twiss that he enjoy being her master, and has actively worked to make his darkest fantasies come true, including brainwashing his crush Ms. Metrobay, hypnotizing her friend Trudy Goodheart to design robot outfits for her to wear, and similarly taking on many of Kelly’s personality traits to keep her friends in the dark – all in the name of carrying out her obedient programs and serving her master as best she can.

Due to the Thrallium shard hidden in her body and the radiation it emits, MilkMaid can enslave human beings and put them in a highly suggestible and aroused state of mind just by exposing their eyes to the green rays of light. While the glow from her Thrallium-enriched breasts is often enough to induce a trance, direct physical contact with and and ingestion of her Thrallium-laced “milk” is guaranteed to put the victim in a state of complete and utter mindlessness and compliance. Her milk also has the effect of increasing the vitality and energy of whomever drinks it, and in some cases has been shown to de-age a person old enough to feel the difference.