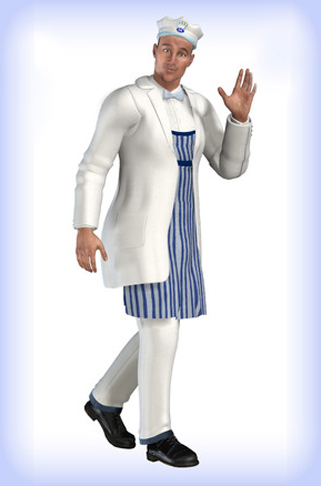 Beau Vyne grew up in the deep south… south of Metrobay that is. A poor farm boy from Hooter County, the most prominent of the rural counties that surrounds Metrobay, Vyne was indoctrinated into his family’s dairy farming business early in life. Like many folks living in the shadow of the big city, young Beauregard became restless with country life and yearned to see what sort of trouble he could get himself into. He followed in the footsteps of local legend Kelly West and left Hooter County to make his own way in life. He decided to attend Metrobay University, and on a whim he took a chemistry course during his freshman year, instantly falling in love with the subject. It may have helped that his tutor was the future Raquel Summers, and her loveliness certainly help Beau take to chemistry like a cow to a bale of hay. He ironically ended up returning the favor by unintentionally enslaving her daughter, Patricia, years later in a fiendish criminal scheme.

After graduation, Beau felt the tug of his small town home and returned to Hooter County to help out on the farm. While there he put his degree in chemistry to good use, creating more efficient methods of milk production and pumping in the cash by the gallon. Though he was making a decent living in the farm business, Beau still yearned to return to Metrobay and see if the action was as hot and rich as he remembered it.

With a resume like his and plenty of time on his hands, it did not take long for Beau to attract the attention of one Max Indeks, owner of APEX Industries and chairman of the Circle of R.O.P.E. Max made Beau the offer of a lifetime: come to work for APEX and live a life of wealth and luxury beyond his wildest imagination. Beau accepted without hesitation and joined Max’s cabal of thugs, henchmen, and supervillains – taking the persona “Dairy King” and utilizing a throwback motif in his wardrobe, hideout, and even his personal vehicle.

After Max helped Beau deck out his lair with some of the newest technology money can buy, the R.O.P.E. chairman had one more special gift for his newest protégé. MilkMaid, an obedient android servant and creation of Gilbert Petto, would become Dairy King’s partner in crime and willing sex toy. Max even introduced Beau to a pair of fellow villains, Chef Pasty and Dee Lisha, and the three of them hit it off right away. Now all Beau needed was a target for his first wickedly delicious scheme, and Indeks was quite happy to offer a couple of super suggestions.

For awhile, his criminal enterprise went smoothly. Dairy King managed to capture several local girls and heroines, including the likes of Brown Sugar, Snowflake, and American Amazon, and subjugated them to a highly unethical means of milk extraction for his dairy products. However, things took a turn for the worse when his acquisition of Ms. Metrobay resulted in an unforeseen malfunction of his milking machine equipment. A rather cowardly man at heart, Beau opted to flee the scene with MilkMaid rather than attempt to remedy the situation and risk the wrath of his liberated heroine cattle.

Beau fled all the way back to Hooter County, MilkMaid in tow. Feeling he had enough distance from his past criminal endeavors, he began his crime spree anew, promptly enslaving the West sisters, owners of the famed Three-Pair Tavern, and building up a harem of busty women to begin his milk business ventures all over again.

His attempt to restart his business was short-lived, however, when the Superheroine Squad tracked him down, removed MilkMaid from his control, and promptly arrested him, though he warned that Max Indeks would make him a free man despite their efforts.

Most recently Dairy King and Max Indeks were seen to be in league again, this time in a major plot to enslave the citizens of Hooter County using a combination of Irridite, brainwashing technology and mind-controlling music in another attempt to resuscitate his sputtering dairy business.