A Radiation Reactor is a device designed to charge the human body with immense doses of radation, with the intent of altering the subject’s DNA. The extreme energy discharge of the miniature nuclear reactors housed in the unit causes the cellular structure of anyone caught in its rays to change dramatically, usually transforming the subject into a finely tuned athletic marvel. 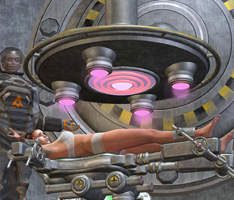 The first such experiment took place in 1946 when Baron Von Ick successfully augmented the bodies of his Zombots in order to create a powerful force of mindless super-slaves. Women from all walks of life, from secret agents to beauty pageant contestants, fell victim to Von Ick’s Mindbender Headset and were reshaped to suit his purposes.

Many years later, Max Indeks and APEX Laboratories revived the Radiation Reactor project in an attempt to create a team of superpowered slaves under the command of the Circle of R.O.P.E. A young scientist namedShelley Calvin was forced to endure the procedure, becoming the savagely sexy Super Freak. After witnessing how dangerous Super Freak can be if not for the use of a control collar, Max decided to put the project on hold while more tests were run.