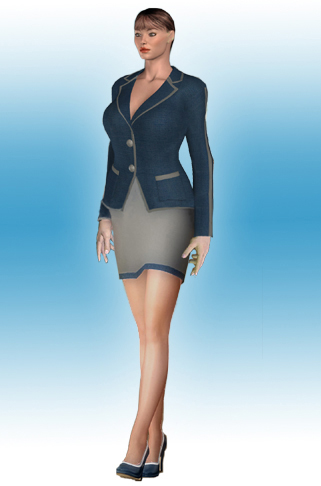 Vanessa Turner is in her first term as Mayor of Metrobay, having recently defeated her incumbent opponent in a long and hard-fought election. A former journalist, Miss Metrobay beauty pageant winner, and occasional fashion model, Vanessa graduated at the top of her class from Metrobay University with dual degrees in law and political science.

Mayor Turner ran for office on a platform of change and hope in an effort to sweep out the corrupt regime of her predecessor. The former mayor was a card-carrying member of R.O.P.E., and used his political power to gain leniency for the perverts, thieves, and other assorted villains whom he let run virtually unchecked throughout the city. With the help of the Superheroine Squad and a few honest cops Metrobay was able to hold its first legitimate election in many years, allowing Turner to ride a wave of public sentiment into City Hall.

All has not gone well since her election, though. Following through on her promise of reform, Vanessa appointed Patrick Coleman chief of police and Marcia Smith warden of Metrobay Prison. This has not set well with Max Indeks and his fellow R.O.P.E. members, who sought to once again bring the mayor’s office under their control. With the invention of the greentooth earpiece they may have found just the method for exerting their considerable influence upon Metrobay’s political structure once more.

Vanessa was assaulted by the brainwashed pair of DareDoll and RollerGrrl in their civilian identities as interns at the Mayor’s office and outfitted with a greentooth earpiece, subjugating her to a highly suggestible form of mind control. Mayor Turner has henceforth been unable to differentiate her own thoughts and feelings from those implanted by R.O.P.E., enabling a subtle and effective form of control over the once stalwart political reformer.

Under their watch, Mayor Turner has been influenced to keep the Superheroine Squad preoccupied, giving them assignments far from the city itself or ordering them on extended vacations. Her controller’s corrupt nature appears to have ingrained itself into her own psyche, at least as long as she wears her greentooth earpiece, and she has developed a sudden and startling attraction to superheroine pornography. Despite her previous interest in men only, she has come to fantasize about other women recently, spending time in her office perusing superheroine bondage and fetish sites. She even used her position as mayor to engage in a brief sexual tryst with legendary superheroine Ms. Metrobay, half-truthfully claiming the ordeal was the result of sinister mind control.

In another instance, she was used to manipulate the Guardian Gals into a trap set by the Queen of Hearts.

Mayor Turner’s leadership skills were also obtained from her brainwaves (via her earpiece) and implanted in the android MilkMaid.

Despite her questionable actions, her reputation and position – as well as strong connections to the Superheroine Squad – have kept her free of suspicion. Mayor Turner and Ms. Metrobay in particular appear to share a mutual history and respect for one another, and frequently meet to socialize on their limited down time. Vanessa’s striking good looks and sensual authority, coupled with her history as a beauty pageant model, have made her a popular political figure with many young male voters. However, she is currently being manipulated to focus her affections on other women, her friend and girl-crush Ms. Metrobay in particular.

More recently, Vanessa’s relationship with Ms. Metrobay was exploited for yet another villainous scheme. APEX geneticist Dr. Virginia Havishaw-Tinker obtained the means to communicate with Vanessa via her earpiece, and used the mayor as a pawn to lure Ms. Metrobay into a trap. Ms. Metrobay and the mayor were then hooked to a diabolical new invention of Virginia’s, and the busty heroine’s famous breasts were stolen from her and transferred into the mayor. It is not known how long the mayor’s new voluptuousness will last.

Given her high standing in Metrobay and the political power she wields, it is fairly certain that Max Indeks and R.O.P.E. are not done manipulating their new government puppet.