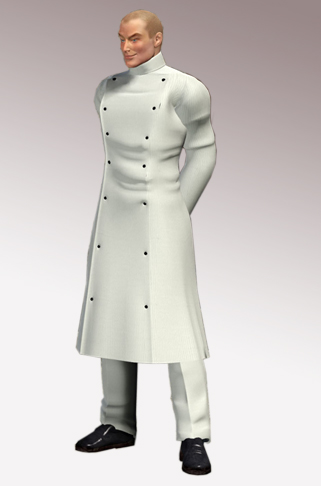 When you are the ninth in a line of Von Ick men, passing down the peculiar family name from generation to generation, there is little surprise when you grow up to be a total creep.

Like his cohort Kikka Brust, Feelix was raised in a house of nobility, his family enjoying the lifestyle that allowed him to receive the finest education money could buy. Like many of his forefathers he became a scientist, and was drafted into the SS to work on some of their highly immoral experiments in genetics and mind control.

When the Reich was defeated he and Brust fled to Metrobay, taking refuge within the Circle of R.O.P.E. and serving their cause in exchange for a return to the wealth and privilege they were accustomed to back home. The Circle provided Feelix with a state of the art laboratory deep within the catacombs of R.O.P.E. Mansion, in addition to the funding and equipment he needed to carry out his radical experiments. Despite Kikka’s apparent domination over him, Feelix remains a level-headed, and loyal, follower of his beloved leader, perhaps due to his own unnatural attraction to her and her diabolical practices. However, he has expressed great reservations towards her and has revealed he does not intend to be just a servant forever.

His reservations and true intentions appeared to have been made clear during a scheme plotted by Kikka and himself to capture and enslave gorgeous beauty pageant contests and use them as the basis for an obedient, mindless zombot army. Their plot appeared fruitful, with successful enslavement of two Agents of D.E.S.I.R.E., many pageant contests, and even superheroines such as Ms. Metrobay andValiant Woman, the latter of which Feelix had been using for genetic experimentation.

When their diabolical plot proved successful, Feelix revealed himself to be a turncoat and restrained his dear friend Kikka, intent on making her another slave in his army and his ideal female companion, despite her fervent protests. It appeared that not even the strong bond between them was enough to placate his power-hungry, lustful desires and insane, twisted nature. Using genetic material from Ms. Metrobay, Valiant Woman, and Kikka, he successfully combined them in another captured pageant contestant, empowering her into the heroine Omega Woman, whom he promptly enslaved.

However, Feelix underestimated the young heroine Gadget Gal, whom he had neglected when he imprisoned her. She successfully escaped and freed his zombot slaves from their programming, and they in turn bound him to the radiation reactor he had used to empower and augment his zombot slaves into superior human specimens. Omega Woman destroyed the reactor’s controls, which caused an uncontrollable stream of radiation to course through Feelix’s body, turning him into a superpowered, super strong, rampaging monster.

As the heroines escaped, Feelix was left with Kikka, and it appears the insinuations that he harbored feelings for her were at least partially correct, as he then proceeded to follow his primal instincts and chose her as his “mate”, despite her firm resistance. The two were never discovered by the Superheroine Squad in Metrobay again, and their ultimate fates remained unknown for years.

Some of Feelix’s early research involved the discovery of and experimentation upon new elements which fell to Earth in a meteor shower thousands of years ago. These minerals, which he namedEnervatum, Irridite, and Thrallium, formed the basis for much of his scientific work throughout the rest of his long career.

Feelix has used part of his R.O.P.E. funding to further his unethical experiments, leading him to develop a machine capable of cellular DNA reconstruction and the Mindbender Headset, perhaps the first technological mind control device of its kind. His contributions to the field of robotics and technology helped pave the way for making Metrobay one of the most technologically advanced cities on the planet, and his indifference at whose hands his creations ultimately fell into also resulted in setting the stage for the future corrupt megacorporation APEX Industries.

Feelix was also the apparent heir and owner of a small tropic island, which he established as a secret base of operations to perform highly illegal and immoral experiments and business ventures without fear of local authorities. It was here that he kept the preserved body of the catatonic Valiant Woman, which he used to further his genetic studies. He also kidnapped and lured several Agents of D.E.S.I.R.E. to his island fortress, where he systematically replaced them with covert android replicas while subjugating the original women to a highly addictive thrallium-derived substance, in affect turning the otherwise stalwart warrior women into his docile and cum-addicted slave.

However, he ran afoul of Draven Ophidian, who sought to reclaim Valiant Woman as his own. Feelix was successfully duped by the more experienced Draven, who reclaimed her and allowed his captives and slaves to run rampant across the island, leaving him in a dire predicament. Feelix reluctantly ceded defeat and fled. It is implied his island was later reacquired by R.O.P.E. and rechristened “Pleasure Island”.

At some point in the future, von Ick acquired time-travel technology and began committing crimes across time, which led him to being pursued by Inspector Ilsa Cross. Over the years and across centuries and millennia they played a cat-and-mouse game which resulted in the two unexpectedly falling for each other. Their affair resulted in the birth of a daughter, Miranda, who eventually became a future version of Pink Pussycat.

Having discovered, to his own surprise, that he truly loved his daughter, von Ick was enraged when an unknown enemy used chronal technology to erase Miranda from existence. After Von Ick took his revenge, he altered the timeline to restore Miranda by having her genetically reincarnated in the 20th Century where she assumed the heroic identity of Fluffy and became a member of the Action Cats, secretly acting as von Ick’s agent.

Eventually, the inherently good nature of Miranda overcame her programming of loyalty to von Ick and she, and her mother, called out Feelix for his actions. As a result, Feelix made a significant alteration to the timeline. In the new timeline, von Ick founded the nation of Stahlinselstadt, also known as the Island of Zombots,  after World War 2 on a small archipelago in the Pacific Ocean, where he assumed absolute power as King Feelix. He faked his own death and continued ruling as Feelix the Second, his own supposed son. Feelix had arranged for Ilsa to be reincarnated in the 20th Century, where she became first a teacher and than one of his Jaegers (more popularly known as “Zombots”), who later became queen of Stahlinselstadt after Feelix faked his death again and had ensured she was pregnant with Miranda. Feelix then retired through time several centuries into the future, where he’s apparently happily retired to be ruler of Australia and served by a loyal harem of the cloned superheroines who formerly opposed him.