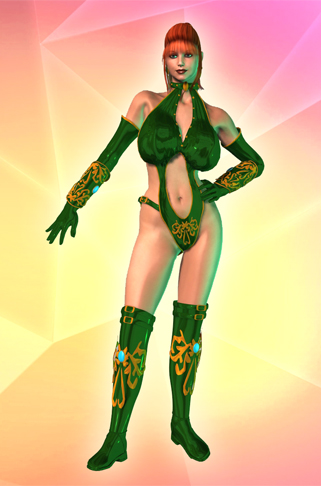 Born to an Irish family in a small town in the Northeast United States, Cara O’Rourke was raised by her father at an early age after her mother past away. Her father, the town’s blacksmith, introduced her to basic metallurgy when she was old enough to understand and she caught on to how metals work and function very easily.

As she progressed into her teenage years she didn’t like the blue collar feel of her dad’s world and grew more fond and fascinated by the lure of the big city. She was more into being of a stylist mindset than the working class reality her hometown provided. When it was time to go to college she wasted no time fleeing to school in the limelight of Capital City.

At the city’s Institute of Technology, she enrolled in as many science courses she could take in a semester because of the natural fascination of metallurgy. She so desired a way to make metals more ‘fashionable’ than they already were. Deep in her studies, she discovered a cool attribute of metals and alloys that engrossed her even more – their magnetic properties.

During the summer between her freshman and sophomore year, she conducted some independent and extensive research into magnetism and electricity. Alone one night in her campus apartment, she set up an elaborate experiment to prove a hypothesis about human magnetic abilities. Ill-advised, she included herself as the test subject. The experiment was successful in proving her theory but she forgot to include a fail-safe shutdown procedure and she couldn’t reach the shutoff lever. The experiment ran continuously until the batteries finally discharged. Caught in the test cycle for hours she was rendered unconscious as the process worked on her. She woke up the next morning with a hangover-like headache.

The next few days were very strange ones to Cara. She saw anything metallic in a new light. It almost appeared ‘alive’ to her. She could see and feel the electrical atomic charge pulsate through every metal object she encountered. The more she focused the more the charge became tangible to her. By the time the next semester started she was able to mold small pieces of metal to whatever shape she wanted to. She began devoting more time to focus on this new ability. So much so that she didn’t enroll in any classes the following semester. So consumed with exploring where this would take her, she dropped out of college altogether. With no desire to return to her home town, she decided to make her part-time hairstylist job a full-time one to support her stay in Capital City.

Having a magnetic personality along with a magnetic ability worked well with her stylist career. She was able to get in a few doors that Capital City’s sub-elite were in. This expanded her contact list to include other stylish go-getters that also had ‘extraordinary’ capabilities and connections.

Presently
Taking a few years of honing her ability and tracking the Superheroine Squad in Metrobay, she pondered and explored the possibility of using her power to help society and even her community. While witnessing a purse snatching right outside her shop, she – unnoticed – apprehended the culprit by attaching his belt buckle to the top of a nearby street sign post. Right then and there, she decided to become a vigilante. With the aid of a few of her connections in the fashion scene, she created an outfit that was versatile and stylish but was easy to transition in to.

She entered the Capital City crime-fighting scene as ‘Zone’ right before American Amazon’s disappearance. She had hoped for a chance meeting in the street but Ainia went missing shortly after. Trying to make her way in the void left by the missing heroine, she bumped into Cecille Chauntel a.k.a Calico Cougar investigating an intruder alarm at the City’s largest tech company. Needing each others help they decided to team up to fill in for American Amazon’s absence and began looking for clues to her whereabouts.

Powers
Cara has acquired the ability to manipulate the magnetic characteristics of metals and alloys on an atomic level. After a prolonged overexposure to an electrical impulse designed to enhance her on magnetic frequency, she is able to magnetically react with any metal or alloy within a 100 foot radius of her body. Honing this skill along with her extensive knowledge of metallurgy, she is now able to push and pull herself through the air as long as there is a significant and sizeable amount of metal around here. She is also able to shape, reshape, combine and/or project any piece of metal at her whim inside that radius.