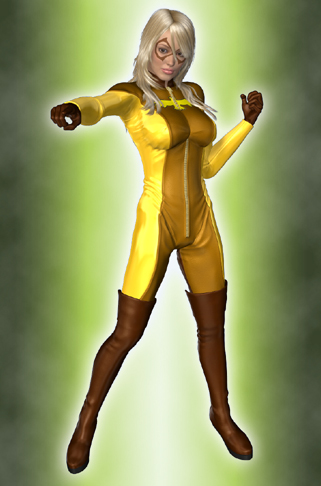 Ever meet someone and walk away saying “she has her head in the clouds”? Well, Angel Gold is one of those people, but for good reason.

As one of only a few full-time Superheroine Squad members with the ability to fly, Goldwing spends much of her time on duty cruising the skies over Metrobay. She is usually tasked with the important job of spotting emergencies or tracking down villains, but has been known to drop in on a crime in progress and take the perpetrators by surprise.

Even though she is one of the smaller heroines in stature, she makes up for it with intelligence, guile, and spirit that few others can match. Occasionally her eagerness to help will get her into some trouble, but her Superheroine Squad comrades are always happy to assist such an important part of the team in her hour of need.

Goldwing has occasionally come to need her friends as backup as she continually seems to take part in battles far beyond her current skill set. She has had encounters with villains such as the Changeling,The Boyz, Sentius, and even Max Indeks, yet always manages to get out of her hopeless situations.

For awhile Goldwing was the junior sidekick to the heroine Knyght Fighter. After Knyght Fighter was kidnapped, brainwashed, and genetically altered via the Modification Machine to the point of being unrecognizable, Goldwing continued to search for her, suddenly thrust on her own and using every ounce of her detective skills and ingenuity to track down her missing friend. Her investigation eventually grew too bothersome for Max Indeks, so he instructed his crew to kidnap her and perform the same body and mind modifications. The transformation proved to be unstable, however, and both women eventually returned to their normal bodies and minds. It was revealed during this time that she is highly competitive. Even after her mental changes, she was determined to be a sexier showgirl and stripper than her competition on stage. 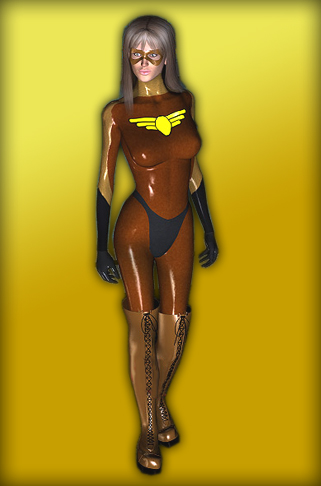 During one of her random patrols, heroine Enchantress abruptly materialized in her proximity after a magic show hosted by Mesmerella went awry. Goldwing has subsequently taken the hypnotized heroine back to headquarters to discover the circumstances of her strange situation. After Enchantress was cured via the Reverse Neuro-Stabilizer, the two received a tip from Liz Trance about her husbandLorenzo’s kidnapping and enslavement schemes.

On the trip to investigate, Goldwing revealed she and Lorenzo had crossed paths before a few years ago during her Freshmen year in college. During that time, she had joined the Somno Sorority sponsored by Lorenzo and wound up enslaved by a hypno-gem, forced to steal from her parents and to give the plunder to her master, Lorenzo, unaware of her actions. It was only through Knyght Fighter’s intervention that she escaped his grasp.

Goldwing is still a prominent member of Grrl Power and appears to be good friends with the likes of Spellweaver, Solaria, and Snowflake. Her smart wits and generally superb intuition has certainly been a valuable asset to the junior team as well. She’s revealed to be dating a guy named Shawn but it is unknown if he is aware of her superhero exploits.

She and the other Grrl Power cadets recently took a visit to the Sunny Side Resort for some R&R, unaware the villain Ring Mistress had taken control of the facility and enslaved its owner, the heroineHoneydoll. According to her surveillance, Goldwing was considered a sizable threat to her operation and dispatched a newly reprogrammed Alpha Woman to send her into a trap. Goldwing was captured and brought to the secret lair of Ring Mistress. After taunting Goldwing briefly, Ring Mistress used a special dildo to inject nanites into Goldwing’s system that transformed the heroine into a glossy, living sex toy named Angel Doll. Angel Doll’s functions were tested briefly by Nene Lee Heaters and Clarissa Calico-Creed before she was carted away by the two for exhibition at a sale being conducted at a secret car wash. Angel Doll was not sold at the time to Vic Reno as Nene said she was being saved for a special auction. She was freed when Snowflake broke free of their control and stopped Nene, returning her to normal.

Goldwing’s powers of levitation allow her to bend the rules of gravity and fly at whim through the air, as light as a feather and as fast as an eagle. She can transfer this ability to anything she has physical contact with. She is one of the weakest heroines, physically, but training from martial arts expert Knyght Fighter has given her plenty of necessary self-defense maneuvers and, despite her small stature, she can hold her own in a fair fight.