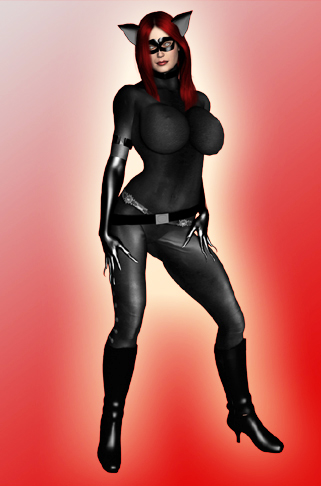 Caitlin “Kitty” Roger grew up in poverty, but her father was a master thief who taught her well the art of cat burglary. Eventually, she started to use her skills and training to become an effective vigilante in her violent, law-deprived neighborhood.

Along the way, she drew the attention of fellow vigilantes Golden Girl and Duality Dame, and the trio become good friends and the founding members of the League of Liberty, forging an alliance to combat the criminals that plagued Liberty Grove.

During this time, she ran into a petty supervillain who called himself the Masked Merc – really a handsome, if violent, man named Hank Rogers. Falling in love with her at first sight, he swore to turn his life around and become a man worthy of her affection, even if his criminal past made her wary of his intentions. Eventually, she reciprocated his affections and the two eloped.

Around this time, about three months of her memory vanished from her mind and she woke up alone one day with Hank missing. She later found out she was pregnant and retired from the life of superheroism and gave birth to a baby girl she named Rebecca. She tried to settle down to raise her child without the chaos and danger of her superhero lifestyle, but the itch to squeeze into her old costume proved too strong.

Unbeknownst to Caitlin, her daughter was already being trained behind her back by Duality Dame, eventually taking on her own superhero identity as Emerald Tiger. She tried patrolling the city with her daughter, but her feisty temper, which she inherited from her father, and her own overprotective motherly instincts made this difficult. Still, when Kat Krusader was kidnapped by Baron Von Vile, she was saved by her daughter and conceded she was worthy of being a true superheroine.

Kat Krusader was one of the first heroines enslaved by the Unity matrix upon its invasion of Earth, turned into Unity Alpha, and she promptly enslaved her own daughter and best friend shortly thereafter. She was ultimately saved by Jupiter Justice and others, returning to Earth with her mind and body returned to normal.

Kat Krusader is a school teacher in her civilian life at the Liberty Grove Academy and routinely fends off the advances of other men. Rebecca claims is because she remains in love with the Masked Merc, despite his disappearance. She is best friends with Duality Dame, whom she made the godmother over her child.

Kat Krusader has several ties to Metrobay and its heroines. She often travels there for teacher conferences and has a mutual long-distance friendship with fellow teacher Raquel Summers, even joining her and her friends for activities when in town. In her heroine identity, she has close ties to the Superheroine Squad and is a good friend to Ms. Metrobay, with whom she shares much in common.