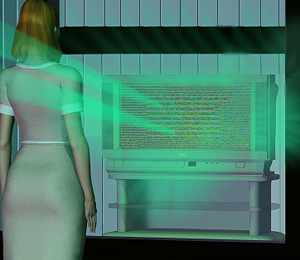 H.E.R.-TV is a new local Metrobay television station designed to appeal to hot, young, single women. Sponsored excusively by APEX Industries, the station featured enormously popular shows such as “You Are H.E.R.” and “You Must Comply”.

The truth is that the H.E.R.-TV channel was infused with a subliminal mind control device designed to beam finely tuned light rays at its intended audience. The viewers are then hypnotized by the H.E.R. (Hypnotically Enslaved Robounit) signal and commanded to march to Sentius’s Factory for further processing. The customized frequency had no effect on men, only enslaving females for future service.

The H.E.R.-TV mind control signals were made available in a smaller, portable device, the H.E.R. raygun. The effects of the H.E.R. signal include stiff posture and glowing green eyes. The effects are only temporary and must be beamed continually for an enslaved H.E.R. drone to remain obedient.

The source of the green glow is a mineral called Thrallium, which gives off a psychotropic radiation and can affect any woman within a short radius. The technicians at APEX were able to focus the radiation’s effects and channel it into the H.E.R.-TV broadcasts, which caused the televisions of the viewers to turn that familiar neon green.