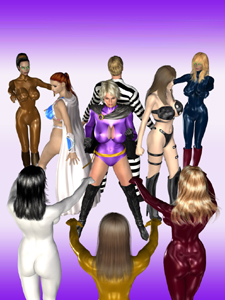 Ted leads Silver Satin and Mechana to the secret stasis chamber of the powerful Omega Woman, only to be confronted by Max Indeks, Super Freak and his assistant Ginger Monroe in tow. During the scuffle, Omega Woman awakens, making quick work of the intruders and offering to assist the heroes. Meanwhile, Ms. Metrobay meets up with Pink Pussycat and manages to deactivate the H.E.R.-TV transmitter. Ms. Metrobay is then captured and enslaved by her daughter Alpha Woman, then Pink Pussycat is captured by Valient Grrl and processed soon after. The remaining heroes confront Sentius, and Silver Satin disables Blackout’s power nullification ability. Sentius almost succeeds in converting Omega Woman and Silver Satin, but Silver Satin’s technopathic abilities overload the conversion chambers. In a desperate last attempt, Sentius attempts to hypnotize Mechana with his own H.E.R. raybeam. He appears to succeed until Mechana reveals an immunity to the ray and sets Sentius up to be taken down with the assistance of Omega Woman. All the women are then freed and put in stasis until Ted Twiss and Silver Satin can fully free their minds and bodies of Sentius’ control. Max, meanwhile, continues to plot his revenge….