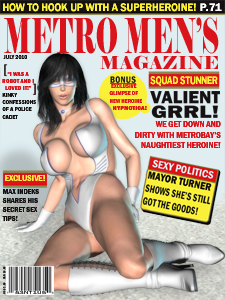 Metro Men’s Magazine is a male-orientated subscription magazine founded by playboy Leopold Strauss. It is widely known for its racy photo shoots, glamorous and exotic models, and scandalous sexual columns and advice. The magazine’s lead photographer is Theodore Ramsey, and their most consistent model has been the exotic Cleopatra Sardonis. Recently, in an attempt to lure in more potential readers, the magazine has expanded its model roster to include the likes of superheroines, the first of which being the heroine Valient Grrl.