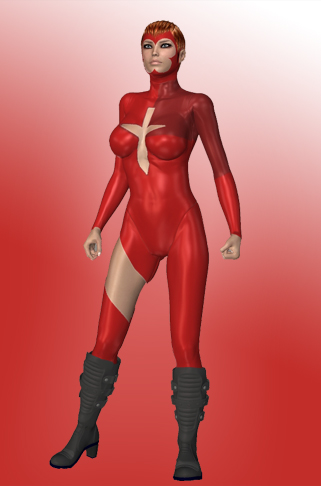 Mari Lai is the elder twin sister of Kari Lai and one-half of the sibling crimefighting duo of Sword and Shield.

Mari was inspired to become a superheroine and follow the path of their mother, herself a respected crimefighter until her untimely disappearance, as well as her adoptive mother, the retired heroine Gadget Gal. Her powers are uniquely tied to her sister, Kari, making her unable to effectively fight crime solo, so she convinced her sibling to join her in her battle against crime. Being the offensive of the two fighters, Mari assumed the title of “Sword”, ready to strike into the heart of evil-doers everywhere.

Of the two, Mari is by far the more aggressive, outgoing, and social one, with a quick temper and a leap-before-you-look approach to life that has given her thrills in love and life but dire repercussions in other aspects of her life.

Powers
Sword shares a special physiological and mental bond with her twin sister. The two have the capacity to share thoughts, emotions, and stimuli instantaneously, though it is a process neither has much control over.

More importantly, Sword and Shield share a bond that allows Shield to absorb kinetic energy and channel the power into Sword, making Shield nearly impenetrable and turning Sword into a blunt instrument of offensive, destructive power.