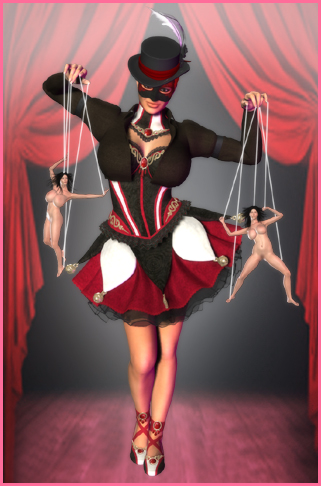 Magda Verboski comes from a long line of Eastern European street performers and vaudevillian gypsy entertainers. Growing up was tough, her family moved around constantly, and she learned to make a living performing tricks, sleight of hand, and participating in outright theft and pick-pocketing to make ends meet.

Unnaturally gifted at putting on puppet shows with her childhood dolls, Magda began make a name for herself in her small circle. However, her big break came when a mysterious individual approached her after a show and offered her a chance at some REAL money.

Soon, the random girls off the street weren’t enough, and she began to raise the stakes herself. Embittered and hardened by her days on the streets scrambling for food and money, she ruthlessly began seeking after more noteworthy “puppets” for her shows, from teachers to politicians to foreigners to, ultimately, Metrobay’s cream-of-the-drop: the Superheroine Squad.

She has developed an intense rivalry with fellow entertainer, Mesmerella, a magician, and the two currently compete for each other’s audience and popularity.