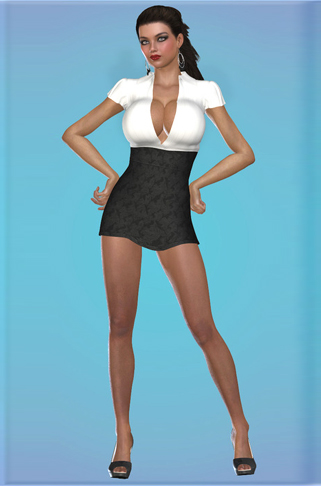 Cassie is a new supervisor at APEX Industries replacing Tien Hoang and introduced by Ginger Monroe to staff there at the request of Max Indeks. Cassie, like her predecessors, has heard rumors about what goes on at APEX but dismisses them as the product of urban legends mixed with a real fascination inSquad activities. Cassie graduated two years ago with a Masters degree in Computer Engineering at Metrobay University and took a position with a company in Rixo City. Due to the downturn in the company’s finances, though, her position was eliminated by the owner in a cost cutting move. Returning toMetrobay, Cassie answered an online job posting and was subsequently hired as the new lab supervisor by Max.

An avid participant in athletics past and present, Cassie regularly participates in local marathons and has even dallied with the notion of trying the triatholon in the future. Upon her return to Metrobay, Cassie looked to join a gym to work out and settled on Club Pump, unaware that it is still operated by Lance Hardwood.

In addition, Cassie is a long time friend of Phoebe Carlton that dates back to Phoebe’s saving Cassie from the not so tender clutches of Miasma Man. More recently, Cassie dated Mick Jones but their relationship ended when Cassie determined that Mick was unable to commit to her on a long term basis.

Notable Appearance: A Day in the Life : APEX