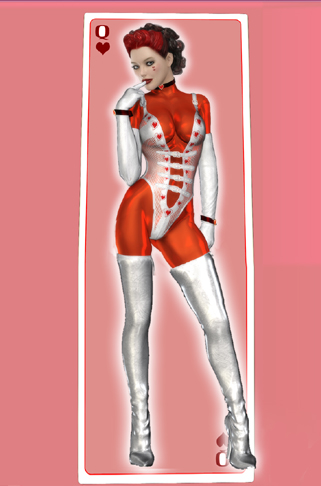 The Queen of Hearts is a casino owner and high-class criminal with strong ties to the Circle of R.O.P.E. She suffers delusions of nobility and royalty and opted the identity of Lewis Carroll’s ruthless, regal Queen of Hearts. She demands her underlings treat her as as a genuine noble and even forces others to assume similar identities, such as Diamond Jack to serve as her “prince”. While her minions play along to appease her insane nature, most are aware of the farce. She uses her casinos to embezzle millions of dollars from the hapless patrons tho visit and often demands more than money from many unfortunate, indebted losers, many of whom wind up as her “subjects” under her rule.

The Queen of Hearts has sought “vengeance” on the superheroines of Metrobay due to what she feels to be a threat to her “kingdom” and her throne. She has drawn the ire of Valiant Woman in particular, who is genuine nobility, and with the backings of her casino operation and ample funding from R.O.P.E. she has begun her plan to eliminate her competition.

Powers
The Queen of Hearts has developed rather unique powers. Max Indeks described her as a “pain vampire” because of her ability to obtain power, energy, and pleasure from the pain and pleasure of others much like how a vampire draws blood for sustenance. The Queen’s victims, in turn, develop an addiction to the pain she inflicts upon them and develop strong feelings of arousal at her cruel ministrations.