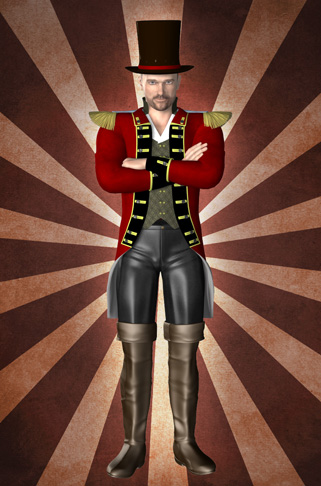 Metrobay certainly has its share of freaks, tramps and oddities – and every circus needs its own Ringleader.

Bailey R. Barnum grew up living the carefree life of a circus performer. His father was a juggler, his mother a stage hypnotist, and they traveled the country entertaining crowds large and small. But when Bailey’s folks wanted to retire from the road and settle down, he would have none of it and abandoned his family as a teenager to go it alone.

Without proper guidance from his loving parents, Bailey fell in with the wrong crowd. He was fired from the circus after several ‘incidents’ involving young innocent ladies, and turned to a life of crime in order to survive. Teaming up with the villainous Klown Krew, Baily took on the role of ringmaster for their perverted performances and used his knowledge of the hypnotic arts to fleece unsuspecting patrons of their hard-earned cash.

Bailey recently obtained a Thrallium-powered ring, which he would use to literally bring unsuspecting maidens to their knees. Rumor has it he obtained the ring from Syman Sayz in a game of chance, but Syman has been unwilling (or too embarrassed) to verify that information.

Notable Appearances: All Dolled Up; Physique