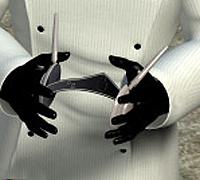 The Mindbender Headset is perhaps the earliest known form of technological mind control in Metrobay and the predecessor to the modern day Control Helmet and Control Collar. The headset was originally a prototype mind control device developed by Feelix Von Ick intended to gather guinea pigs for his unethical and highly immoral experiments.

The Mindbender Headset was technologically decades ahead of its time, even though the original versions were rather rudimentary. Anyone wearing the headset was subjected to an intense verbal indoctrination and mental brainwashing, leaving the wearer in an almost catatonic state of mind. An individual could then fill this “void” with his or her own commands, ensuring the subject would obey each and every order. 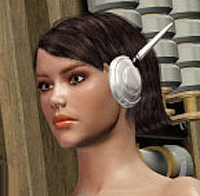 However, unlike its successors, those wearing a headset are somewhat aware of their actions, but are unable to resist commands given to them.

Part of the limitations of the archaic technology was that the strength and quality of the verbal brainwashing was not consistent, and bouts of extreme mental and physical duress could ultimately result in brief lapses of control. Also, unlike the more modern “human robots” created by Sentius and Dr. Twisted, these so-called “zombots” were all but incapable of anything but the most primitive and basic of tasks, literally resembling shuffling, mindless zombies and jerky, ineffectual robots. Nevertheless, the zombots proved effective threats in greater numbers, and their strength and obedience made them valuable footsoldiers for Feelix and his companion, Kikka Brust.