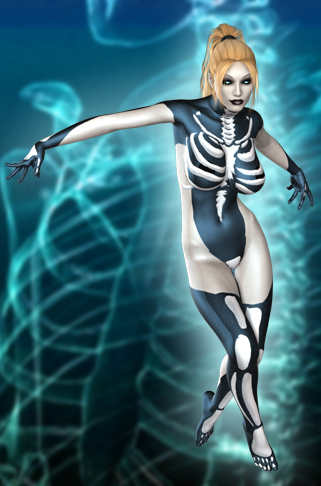 Giselle Eastman was a normal and loyal safety worker at the Metrobay Nuclear Power Plant and would have remained that way if not for an unfortunate “accident”.

Having discovered one of the lab workers at the plant had been smuggling radioactive materials out of the building and selling them to various Metrobay criminals, Giselle attempted to blow the whistle on the corrupt employee.

Unfortunately, the shady worker caught wind of her investigation and sabotaged one of the containment rooms she was inspecting, causing a malfunction that flooded the area with highly volatile radioactive energy. However, rather than killing her and ridding the smuggler of his problems, Giselle found her body cells infused with the radiation and able to harness it herself as a weapon. The X-Ray Woman had been born.

Now immune to all forms of radiation, Giselle lends her powers to the Superheroine Squad in times of need while also serving as power of the Nuclear Plant’s security force, preventing countless criminals from making off with dangerous and powerful nuclear materials.