The Modification Machine is a highly sophisticated body and behavior modifier developed by APEX Labs to simultaneously ease the growing intrusion of superheroines prying into their affairs and to recruit APEX-employed callgirls, strippers, secretaries, and whatever other positions need filling.

The Modification Machine was first tested on Superheroine Squad member Knyght Fighter, successfully turning the short-haired, petite brunette into a voluptuous blonde bombshell stripper who went by the stage name “Sindee”. It was a process so complete and thorough that her junior partner, Goldwing, was unable to recognize her when they were reunited face to face. Goldwing herself was later converted into a statuesque redhead after prying too deeply into the matter.

The Modification Machine changes the personality, memories, and even body shape of whoever is inside, though certain inherent personality traits, such as Goldwing’s natural competiveness, are still present. It nevertheless is capable of creating entirely new personas, tailor fitted to whatever needs APEX requires.

The original process, though initially thought to be a major success, turned out to be flawed, and both Goldwing and Knyght Fighter eventually reverted back to their original bodies and minds. Max Indeks severely punished his employees for thier failures, though the heroines seemed not to recall their time spent as sexually provocative bimbos. 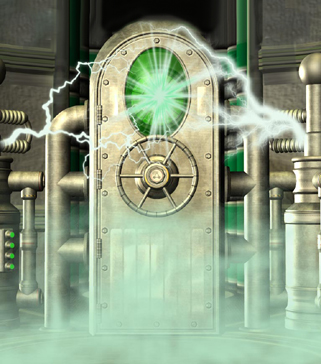 The project was restarted from scratch, resulting in the construction of a second version of the Modification Machine, this one much more effective and long-lasting. The test subject for this new machine was Jane Baker, an average looking girl at a deadend in her life. Jane was transformed into a highly sexual and seductive personal secretary for Max Indeks, now going by the more alluring name of “Ginger Monroe”.

Another heroine that has undergone the modification process is Freedom Girl, who was brainwashed to be a dutiful and loyal wife to the youngest member of the Circle of R.O.P.E., Wesley.

The Modification Machine was also intentionally used by R.O.P.E. associate Preston Prescott who, in his desperation to make pure and virtuous heroine Pink Pussycat fall in love with him, erased his entire villainous persona to create the heroic and noble identity of “Adonis”.

A relative of the Modification Machine is currently being used by Gilbert Petto in his workshop as the device which molds his doll templates into spitting images of whoever submits to his scanner/duplicator invention.