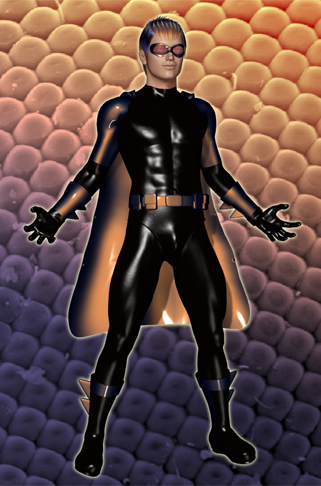 Powers
Bugeyez can see nearly everything around him in perfectly clarity. His goggles are linked directly to his mind to filter out unnecessary noise to prevent visual overload. With complete 360-degree vision, few can get the drop on Bugeyez, and his own reaction speed has increased to superhuman levels, to the point where he can dodge multiple assailants from a variety of angles.

Eizner was a brilliant science student at Metrobay University. He was fascinated by insect vision and he wanted to recreate the ability in the school lab. But University policies restricted him from being able to conduct his experiments. So, he decided to pursue his ambitions by stealing lab equipment from the school and conducting his experiments in the basement of his home.

Then one night superheroine Gallant Lass saw Eizner sneaking out of the school science building and loading equipment into his car. She followed him to his home. He was in the basement conducting what he thought would be his breakthrough experiment when Gallant Lass came to arrest him for theft. In a scramble to finish his experiment before being arrested, Eizner caused an explosion and the sensors hooked up to his head shot waves of data into his brain. When he awoke his vision was blurry. But by using special goggles he had previously constructed, he was able to see with insect-like vision.

Instead of being angry with Gallant Lass, Eizner was very grateful. Without her interference, he may not have seen his ambitions come to reality. He found himself having a singular fondness for the heroine. In his delusional mind, Gallant Lass helped him because she loved him… that she saw how great he would become. He believed she wanted to be his lusty lab assistant, helping her master become the fully transformed human insect he aimed to be. He now designed a supervillain costume and called himself BugEyez.

He was given probation, but banned from the university. He decided he would continue to steal the equipment he needed to continue his experiments. Once again he was captured by Gallant Lass. This time he received prison time. But, with the help of other supervillains, he broke out of jail and was able to capture Gallant Lass. In return for helping him escape prison, he agreed to help Dr. Tinker and Miasma Man conduct experiments of their own ( Musk of the Mynx series ). Creating new capabilities for his goggles, BugEyez could now project holographic hands that could physically manipulate objects. He used these virtual hands to battle the superheroine Kitten.

Although the experiments were foiled, BugEyez managed to escape. He now looks to continue turning himself into the perfect human insect by any means necessary.