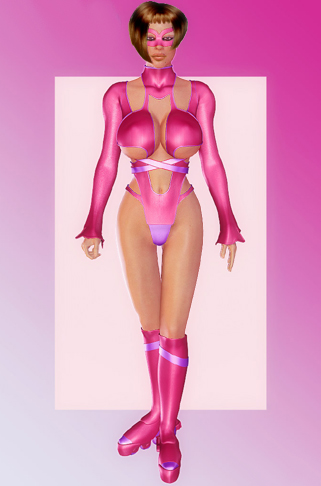 Aprisa grew up in a large immigrant family, the youngest daughter of two hard-working Latino parents who moved north to Metrobay in search of a better life. Because her parents and older siblings were always at work or school, Aprisa learned at an early age how to take care of herself out on the mean streets of ‘Grime City’.

One day she and a couple of mischievous friends happened past an old magic shop on the edge of town and witnessed the elderly owner being robbed and terrorized by a group of brutish thugs known asThe Boyz. Showing exceptional ingenuity and bravery the young upstarts were able to block the criminals’ escape until the Superheroine Squad could arrive to save the day. To thank them for their courage the store owner – a retired wizard – enchanted the girls’ transportation with a magic spell giving each of them the speed and protection necessary to help others in their time of need.

Years later the Speed Demons continue to patrol the streets of Metrobay delivering their unique brand of vigilante justice and looking out for those who need help the most.

RollerGrrl has quickly become an upstart and popular rising heroine in Metrobay and has had several run-ins with various criminals throughout the city, from lowlifes like The Boyz, to the android Sentius, toMax Indeks himself.

RollerGrrl was introduced in “Superheroine Squad” as a hypnotically enthralled member of Sentius’s H.E.R. drone army and codenamed the “Rose Controlunit”. She was one of many to have been enslaved by the nefarious hypnotic H.E.R. TV program. She served Sentius mindlessly until his eventual defeat.

She next found herself taking center stage in the story “Wireless”, where she became the victim of Max Indeks’s new mind controlling greentooth headset scheme and was lecherously felt up by his assistantGinger Monroe. She was then unknowingly responsible for hypnotizing her best friend and fellow Speed Demonette Holly Swift, aka DareDoll, as well as her co-worker Danielle Jordan, and even the Mayor herself, Vanessa Turner.

Rollergrrl appears to be on friendly terms with the Superheroine Squad, despite not being an official part of their group. Despite her prominence as a heroine, she has successfully hidden her secret life away from her family. She was given an internship at the Mayor’s office by Ms. Metrobay, and she is very close with fellow Speed Demons DareDoll and Shadow Rider. She is often seen with Holly as the two share a love for extreme sports, beach volleyball, and are both interns at City Hall. Police cadet Mick Jones also possesses at least a passing familiarity with her and heroically came to her aid when Aprisa was blackmailed to publicly humiliate herself in exchange for a kidnapped Holly’s safe return, though she was unconscious at the time of Mick’s assistance. She has also expressed great attraction towards a young man named Jorge in her college classes.

Recently, both DareDoll and Shadow Rider were enslaved by Lance Hardwood and forced to recruit girls at his Club Pump. RollerGrrl discovered the ploy and attempted to alert the Superheroine Squad, but her call was intercepted and she was betrayed by her enslaved teammates. While held captive by Brunhilda Krammpacher, her best friends pumped her full of thrallium, turning her into yet another Club Pump slave.

The girls were forced to particpate against each other in a R.O.P.E.-sponsored sporting event with a twisted, perverted slant for the amusement of their crooked audience. RollerGrrl in particular maintained a fiercely competitive spirit and sought to become Lance Hardwood’s “number 1 slave”. Eventually, Lance Hardwood made the error of sending RollerGrrl and her friends on a mission to eliminate a competitor, but the journey through the speed force restored their minds. The heroines raided Club Pump and arrested Brunhilda Krammpacher.

After her taxing ordeal with Club Pump, Aprisa felt she needed a proper getaway and joined several heroines on a vacation to Metrobay’s Sunny Side Resort for some R&R. Unfortunately for her, the owner of the resort, Honeydoll, had been enslaved by the villain Ring Mistress prior to their arrival and helped separate and enslave her guests one at a time. Aprisa herself was captured when she tried to indulge herself in a mud-bath spa and had a mind-altering lotion mask covering her face and ultimately turning her into a nano doll. Renamed Muneca, the dollified woman joined her enslaved friends in an auction hosted by Nene Lee Heaters for R.O.PE bidders. She was ultimately freed when Snowflake broke out from their control and defeated Nene, returning them all to normal.

Aprisa’s abilities endow her with great physical speed, the endurance to handle high velocities, and superhuman reflexes and reaction time. Her enchanted rollerblades only augment her speed, allowing her to dash around town as quickly as a speeding race car.
Notable Appearances: Superheroine Squad, Wireless, Club Pump, Resort Tales, An Acquired Taste