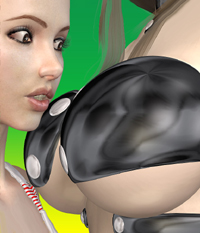 One of the more “interesting” things Metrobay is known for is its unnaturally high number of attractive, well endowed women.

Years ago, the vast majority of the citizenry was rather sickly, due in part to the careless disposal of chemicals and waste from APEX Industries. When the source of the widespread illness was traced back to APEX, the company began an immediate clean-up venture and promptly began to add an experimental vitamin formula to the water supply of the city.

It has been implied that this formula helped its women grow up unnaturally strong, healthy, and highly developed, as well as triggering the mutation of dormant super genes in many of the women, leading to a dramatic rise in the meta-human population. The most telling sign, however, was the breast sizes of the women grew exponentially larger while drinking the vitamin-enriched water, with many finding their bosoms to be hyper-stimulated and sensitive, including the ability to lactate on their own.

Living in a city with a decidedly above-average gene pool has proven troublesome for more naturally developed women and outsiders, and many go to great lengths to fit in, often buying breast-enhancement products from APEX or resorting to other methods, from hormonal drugs to untested science experiments to even magic.