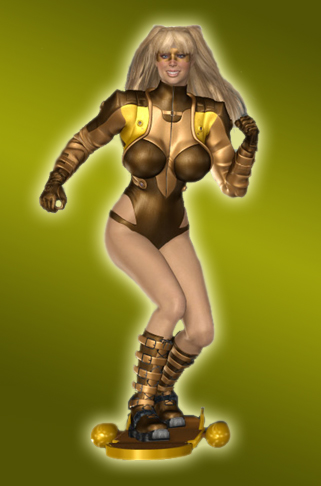 Holly Swift was a terror of a child, the type of kid that couldn’t sit still for five minutes without bouncing off of the walls and driving her parents crazy.

One day Holly was at Vestia Park with her parents when she wandered over to the skatepark where a group of teens were performing tricks. One of them offered to teach her to skate, and she took to the board like a fish to water.

Holly’s parents, sensing a positive outlet for their daughter’s excess energy, encouraged her at every turn, and Holly eventually became the best competitive skateboarder Metrobay has even known.

A couple of years later she was out riding with a couple of friends and helped stop some thugs from robbing an old man’s magic shop. The man – a retired wizard – granted magical powers to her and her board to show his gratitude for her help.

Using those powers for good she became the costumed heroine known as DareDoll. She gained the inspiration for her codename from the original Superheroine Squad’s Dare Damsel, whom she had read about in the history books.

Oh, and the teen who first showed Holly how to skate? Her name was Aprisa Devante, who would go on to become Holly’s lifelong best friend and future crimefighting partner RollerGrrl. Together with their friend and fellow heroine Shadow Rider the group formed their own crimefighting team called the Speed Demons.

Holly and Aprisa in particular are fairly inseparable. They share a passion for beach volleyball and their team, the Metrobay Blue Jays, was the state’s runner-up (only due to unfair disqualification) and both are interns at City Hall. She was recently tricked into wearing a greentooth earpiece and mind controlled to enslave their co-worker Dani Jordan and the mayor herself, Vanessa Turner.

Her misfortune continued when her sister, Haley, was controlled by a thrallium-laced drink at the new gym, Club Pump. Haley then persuaded Holly to try the club out where she was similarly enslaved by the fiendish duo of Lance Hardwood and Brunhilda Krammpacher. She and her sister were then forced to exercise in the buff for their perverse enjoyment. Things worsened when Shadow Rider attempted to infiltrate the organization and was discovered and captured. Under Lance’s enslavement, she exposed her secret identity, as well as Holly’s, and the two then were forced to trick their partner RollerGrrl into joining them at the club. When her defenses were lowered, the enslaved heroines knocked RollerGrrl out and pumped her full of thrallium as per their instructions, forcing Aprisa to join them as an obedient Club Pump slave. She and the others have been forced to compete in a perverse sports tournament against each other for the amusement of R.O.P.E.viewers.

Lance Hardwood made the error of sending DareDoll and her friends on a mission to eliminate a competitor, but the journey through the speed force restored their minds. The heroines raided Club Pump and arrested Brunhilda Krammpacher, but unfortunately her sister Haley was not there. DareDoll then received a distressed phone call from her sister claiming she was being held hostage. Naturally, it was a trap set up by Lance, who forced Holly into a conversion chamber and flooded it with a thrallium-derivative, thrallium Z, which permanently enslaved her to his will.

As her first act as Lance’s lasting slave, she and her sister suggested their mother, Helen, assume the position Brunhilda vacated upon her arrest. Together, they helped enslave their own mother, Helen, and Holly has been given instructions to investigate and spy on the Superheroine Squad as an inside mole for Lance, a task she carries out with unquestionable loyalty.

Besides her love for extreme sports, Holly has also been shown to have a strong interest in art, with pictures, paintings, and drawings of famous artists plastered on her apartment walls as well as several sketches of her own.

Holly’s powers are supernatural in origin yet function in a biological manner similar to other superpowered heroines’ abilities. She is capable of superhuman speeds and reflexes, even without the aid of her enchanted skateboard. With her skateboard, she is able to move at speeds near the speed of sound. Holly’s body is capable of withstanding high velocities with minimal discomfort and her reaction time is both abnormally acute and highly developed.