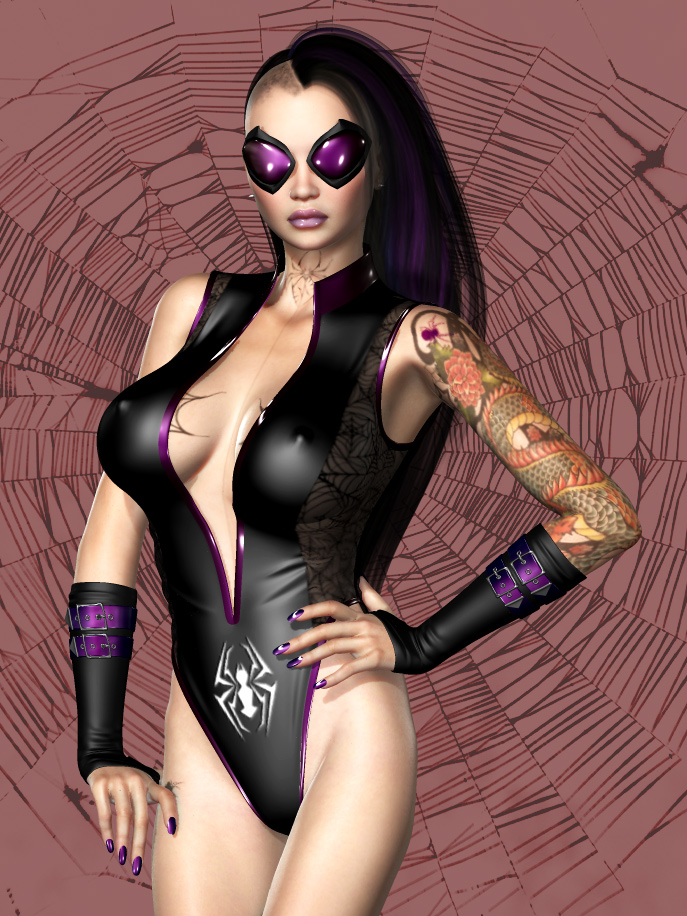 Alias: SpinneretReal Name: Sun Hi KilAge: Unknown, but she has claimed to be over 1000 years old. Her physical appearance is that of a 22 year-old woman. Height: 5’8”Hair: BlackOccupation: CriminalAffiliation: noneAbilities: Generating strong, adhesive webbing from her bodily fluids. Above average strength and endurance. Ability to cling to surfaces, using the sticky sweat or moisture from her hands. Accomplished dancer.

The being known as Spinneret is rumored to have been alive for many centuries. There are alleged photographs of her as far back as the 1940’s and stories of legend which feature her has being both a hero and a villain in Korea and Japan.

After having failed at more grand plans of being a ruler and queen, she eventually decided simply to make the pursuit of pleasure and knowledge her life’s ambition. She has spent hundreds of years studying and travelling, and primarily mastering the art of dance. While no longer a megalomaniac, she still participates in criminal activity to maintain her lifestyle, and she uses human victims which she uses as a form of ‘food’ to both replenish her powers and her youthful look. Her being at colleges also makes it easy for her to find prey.

It is unclear the nature of her powers, but she acts as somewhat of a vampire, in that she can draw life-force from her victims, which keeps her youthful appearance in place. She can apparently absorb semen from men, and her body converts it to her stored sticky-fluid, which she can secrete from her body (heavily from her mouth, nipples and vagina for subduing enemies or creating webs, and in minute quantities from the pores in her skin, for sticking to walls and surfaces). She can absorb human blood and her body uses it to heal her and keep you looking young.

In the year 1912, Spinneret encountered a new adversary in the young heroine called Kuneko, the Ninja Kitten. Kuneko would foil Spinneret’s plans and prevent her from collecting victims, and they battled all over Asia. Desperate to escaped Kuneko and find new victims, Spinneret attempted to travel to the United States via ship, but Kuneko was hot on her tail, and the two would have their final battle at sea. Spinneret knowing she would likely be defeated again, hid on the very large ship as long as she could, while Kuneko searched for her. Spinneret decided to sabotage the ship and escape on a lifeboat with enough provisions to make it the rest of the way across the sea. The sabotaged ship eventually collided with an iceberg and sank, taking several innocent passengers with it. Kuneko was also dragged to the bottom of the sea, however she was rescued by the self-proclaimed Undersea King Maron, and put in to his storage system where he would collect his ‘wives’.

Spinneret toured Northern America for years, and is currently residing in Metrobay, and attending Metrobay University, under the guise of a common student. Kuneko has recently resurfaced, having been rescued from Maron’s captivity, and also ironically having not physically aged, due to Maron’s suspended animation process, so Kuneko and Spinneret’s rivalry begins again in Metrobay.