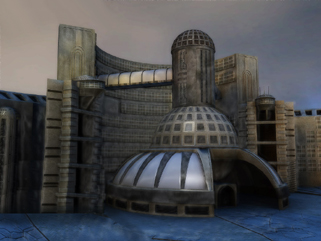 APEX Labs, Inc. (full name: Applied Experimental Laboratories, Incorporated) is a privately owned and operated corporation specializing in highly advanced technological and biological research. The laboratories are actually just a small part of the overall company known as APEX Industries, which vigorously promotes its consumer products division as the public ‘face’ of the overall business. It is the consumer division which generates the tremendous profits for APEX and its owners, much of which is funneled back into the sometimes illegal and often immoral special projects division.

The company is owned by a group of investors made up entirely of Metrobay’s most wealthy and elite citizens, the super-secret Circle of R.O.P.E. The majority owners and managing partners of APEX areMax and Vivian Indeks, who inherited the company from her father many years ago. Max oversees the day-to-day operations of the company, having built it from a small research facility into a billion dollar a year business empire.

Max has been known to run APEX with an iron fist and utilize its assets and employees for his own illegal and unethical purposes. He is able to operate above the law by way of his virtual stranglehold on Metrobay’s political and judicial systems.

APEX was founded in the middle part of the twentieth century by a cabal of scientists who immigrated to Metrobay from Europe after the Second World War. Included in these individuals was Feelix Von Ick, considered by some to be the father of super-science (and some would say ‘mad’ science) in modern Metrobay.

Many of Metrobay’s most brilliant scientific minds have worked for APEX at one point or another. They include Ted Twiss, Belinda Giolla, Marcy Smith, Preston Prescott, Shelley Calvin, and many others. Employees of APEX have been responsible for many of the gadgets, androids, and other inventions that have simultaneously made Metrobay both a beacon of technological development and an abyss of depraved supervillainy.