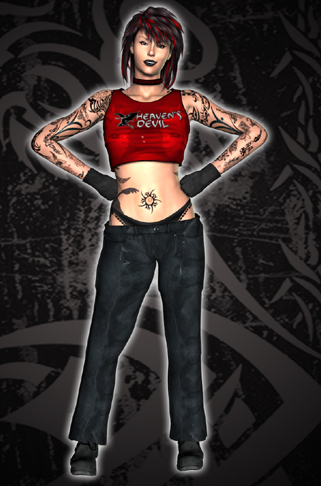 Desdemona Rushman is a tough girl with a troubled past but a good heart. She was raised in the slums of Grime City by her father, a rugged, beer-swigging ex-biker of the fabled “Heaven’s Devils” biker gang who had set up a bike shop in Metrobay. She grew up surrounded by the roar of choppers and the roughest riders that passed by her father’s shop, often hearing their tales of life on the road and the freedom of the highway.

Eventually, the Circle of R.O.P.E. took an interest in her father’s property and determined it was an ideal location to conduct many of their criminal endeavors. When he refused to sell, they sent a gang of thugs to break both his hands to ensure he couldn’t fix or upgrade any of his client’s vehicles. What R.O.P.E. didn’t expect was Desdemona’s own proficiency in making, fixing, and upgrading cars and motorcycles, having being taught the mechanics of auto-shop before most individuals could read or write. Desdemona took over her father’s shop while he recovered and helped quickly spread the word of their situation to any biker who stopped by.

When R.O.P.E. learned that Desdemona’s father’s shop was still making a profit, even with him recuperating, they sent their thugs to intimidate them again, but Desdemona was ready this time with a small legion of hardened bikers who knew when to stand up for one of their own. Chasing R.O.P.E.’s thugs out of their territory, Desdemona and her biker friends liberated their turf from Max Indeks’s control, creating “Dante’s Driveway”, a solitary street in Grime City where the toughest bikers gathered and where even villains fear to tread.

Once her father fully recovered, he knew his young girl was ready to take over his job. Slipping on his worn leather jacket and leather gloves, he gave her a big bear-hug goodbye and left her his shop while he took to the roads with the Devils once more.

Desdemona did well for herself following his departure, but she knew she couldn’t rest on her laurels should R.O.P.E.’s goons decide to come back when she wasn’t prepared. She had always been a strong, different girl, a tomboy that preferred the roar of an engine to the latest pop song, the scent of dirt, grime, and grease to the aroma of perfume, and the taste of hard liquor to fine wine. She wasn’t above challenging other bikers to arm-wrestling contests if she was feeling cocky, either. But she decided to join the newly formed Club Pump to keep herself in tip-top shape anyway.

While there, she was hypnotized by Lance Hardwood and Brunhilda Krammpacher, along with several other women, including the heroine DareDoll and her sister. Desdemona managed to resist their hypnotic thrallium treatments long enough to attempt an escape and encountered Shadow Rider, whom she attempted to warn of the impending dangers. Her warnings came too late and Shadow Rider was enslaved, along with Desdemona, both of them forced to participate together in sordid games of carnal pleasure for paying R.O.P.E. viewers. She was ultimately freed when the Speed Demons fortunately recovered and exposed the Club as the twisted scam it was.

Following this, she and her former fellow-captive Casey Roth, aka Shadow Rider, have developed a strong friendship, based partially on their difficult mutual experience but more so on their mutual love for motorcycles. Desdemona has also become her go-to gal whenever her bike is in need of a tune up.

Desdemona’s bad luck continued when she became the target of Leela Patel, who discovered that Azure Avenger had secretly been supporting her bike shop as a favor to her father. Knowing the shop was lucrative and that Desdemona had a clear connection to several prominent heroines, Leela captured her and subjugated her to a nano-leash, rendering the young woman her fully obedient spy and puppet. Desdemona now feeds the APEX Alliance her street-level intel without anyone’s suspicions.

It was revealed by Brunhilda that Desdemona is bisexual and not particularly picky about the gender of her lovers so long as they can deliver when and where it counts. Beyond her love for motorcycles, Desdemona also plays the drums in a garage band named “Heaven’s Devils” as a tribute to her father’s gang.