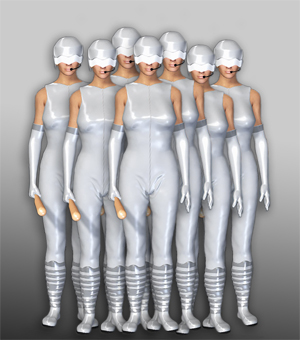 The Spermettes are the mindless and obedient slaves to the foul villain The Diddler. Some of them used to be his former employees that became disgusted with his chauvinistic attitude towards women and unfair and dangerous working conditions. Many others are policewomen, government agents, and heroines sent in to investigate his criminal doings and wound up captured.

Outfitted with modified control helmets and turned into mindlessly obedient servants, the Spermettes serves as Diddler’s workforce, personal security, and an unending supply of pleasure slaves to appease his insatiable sexual appetites.