Deminsha is a demoness in Hades and the step-sister of Lascivia. Unlike her sister, who has shown a great deal of interest and even affection towards human beings, Deminsha is a “deceitful, cruel, sadistic, evil-hearted bitch”, in her sister’s own words and a sadistic mistress to the poor, unfortunate souls that wind up under her care. 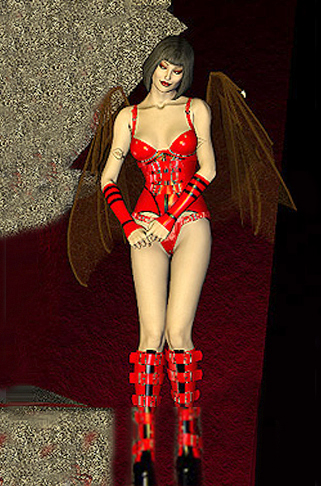 When Lascivia was demoted from her position as princess of Luxuria, Deminsha was given the right to rule, a position she eagerly accepted, knowing full well her sister’s new status as a lowly slave to lesser demons would be her punishment, a fact that Deminsha seemed to relish and enjoy. She has been tasked with hunting down her renegade sister by Queen Sadistra and bringing her back to endure her punishment.

Deminsha wouldn’t have it any other way.

Her supernatural abilities are almost limitless in nature and potential. She has displayed acts of flight, supernatural seductive skills, and unnatural sensory awareness, though this represents just a small sample of her demonic powers.