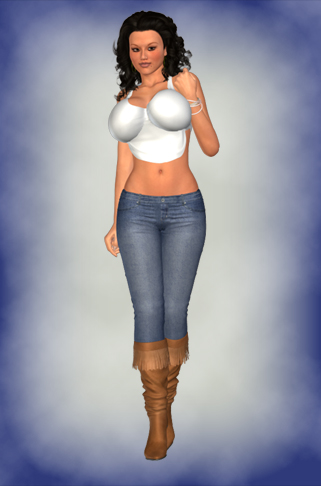 Fabiola Mendes is an instructor at Metrobay University and head of the foreign language program there.

Born in Brazil, Fabiola caught the eye of a Metro Men’s Magazine owner, Leopold Strauss, who offered her a lucrative modeling gig at his company. Fabiola, barely out of high school, would have accepted his offer on the spot, but she had one obstacle in her path: a very prominent language barrier.

Fabiola decided to learn English and was surprised as it came to her as naturally as breathing comes to others. In only a few month’s time, she had become fluent in English, enough so that she accepted Leopold’s offer and began touring the world with him as one of his high-paid models.

During their travels to exotic locales, Fabiola discovered she was able to learn the native language of most foreign countries with minimal effort. After a year’s time traveling the world, she had become fluent in English, Spanish, Japanese, Cantonese, Italian, Swahili, Thai, Korean, and her native Portuguese tongue.

Her skills caught the attention of Metrobay U’s head of staff, who managed to surpass the lucrative offer Leo was paying her to be his arm candy, and Fabiola accepted, moving to the big city to take up a career as a foreign language instructor, not just for students but for public officials and important heads of state, while also serving as a very in-demand translator for foreign dignitaries.

Her beauty, class, and skills made her a popular instructor at the college, especially amongst her male students, many of whom she openly flirted with or engaged in indecent student-teacher affairs, knowing her unique talents and social connections made her almost beyond reproach.

But she was not without her own code of ethics. She appeared to finally meet her match, falling in love with a dashing neurologist instructor at the school named Greg Northern, and it appeared her wild lifestyle might finally be put on hold. They dated exclusively for many years, going so far as to make marriage plans, but then Fabiola discovered her beau’s secret life concocting unethical devices to use on his own students. Together with fellow teacher Ms. Ivanova and then-student Megan Plainsmith, Fabiola exposed her lover and he was unceremoniously fired.

A few years later, Greg Northern returned, having perfected his experiments, and was eager for revenge. He targeted those that had ruined his reputation, including Fabiola, and used his self-created bimbo gun against her, turning her into a stupid and aroused slave for him to enjoy. She was freed and restored to her proper mind by rookie heroine Shield.

Fabiola may be popular amongst the boys at the school, both students and instructors, but she has her share of detractors too. Fellow instructor Raquel Summers, has written many complaints to the board concerning her inappropriate behavior, and the two share a rather antagonistic relationship, but Fabiola knows that so long as there is a demand for her oral skills, she’ll always have a place at the university.

Recently, Fabiola had visited Raquel on a routine work matter but she was ambushed by her scholastic rival and turned into a graybot. Shortly thereafter, following the commands of an unseen master, Fabiola encountered Maggie MacGilleycuddy in a deserted alleyway and converted the police woman into another graybot. Although both women were each seen at work looking and acting perfectly normal shortly afterwards, the long term effects remain to be seen.