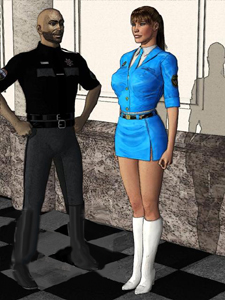 Campus Capers chronicles the adventures and misadventures of the young women enrolled at Metrobay University and the rather shady events that occur after class and behind locked doors. So far, it has followed the exploits of young Blackout, a naive and inexperienced superheroine, as she attempts to solve the case of several missing school girls.