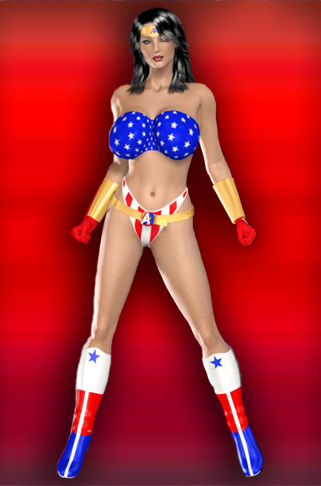 American Amazon is an experienced crime-fighter and champion of All-American ideals of truth, liberty and justice. Patriotic to the core, her unfailing sense of virtue guides her to take up the stars and stripes and defend her adopted country against the onslaught of evil pervading every corner on the streets.

Surprisingly, American Amazon is not a native of Metrobay or her current home, Capital City. She is really Princess Ainia, born and raised by the elusive and powerful Highland Amazons – a group of powerful, warrior women and descendants of the barbaric female slaves the Atlantean princess Valaya – a.k.a. Valiant Woman once captured and eventually joined up with. Her race of beautiful Amazons dwells in seclusion, far away from the influence of the outside world of war, corruption, and male dominance. For a time, she was content to live in paradise with her mother, Queen Chrysaetos, and her sister, Princess Cleta, but her insatiable curiosity drove her to seek knowledge and worldly insight.

Cursed and disgraced by the exposure to this nature, Princess Ainia was no longer able to maintain her status as ‘Anymta’ – protector of the Amazons. In a mutual agreement between herself and her clan, she was sent to the outside world to expand her mind and protect the identity and whereabouts of the clan as an outsider.

Upon her arrival in America, she fell in love with the modern world of men and machines and fully integrated herself into modern society. Through the help of known associates to her Amazon clan, she was able to take on the identity of Anna Creech and integrated into the mainstream of her new home, Capital City.

Still retaining the morals and ethics of her Amazon training, Ainia took up law enforcement as a career for Anna. Due to her peak athleticism and formidable combat training she made ranks quickly and landed a job with the Federal Intelligence Agency, thus allowing her to stay up to date on criminal activity as well as keep tabs on any intrusions to her homeland and clan.

On a visit to Metrobay for an agency assignment, she was introduced to an earlier installment of the Superheroine Squad. She was enamored by the group of superior Amazon-like crime-fighters. This initial meeting helped swell up an idea that she was pondering – in order to be more effective in law enforcement and a use her Amazon warrior training to its fullest, why not become a super-heroine herself.

One of her first venture into super hero crime-fighting resulted in her sexist opponent mockingly referring to her as a “freedom broad”, a term she naively misunderstood as a compliment and accepted as her crime-fighting moniker. Using her powers, Freedom Broad debuted as a popular protector of those in need in Capital City.

Freedom Broad also was the mentor and close friend to a junior partner, Paula Revere a.k.a Freedom Girl, though the two amicably split and Freedom Girl went on to join Grrl Power in Metrobay.

Ainia continued to use the moniker ‘Freedom Broad’ and the alias “Anna Creech” to serve  the government that needed her aid. However, Freedom Broad’s passionate and blind faith in her government, especially the corrupt legal system that rules the police and courts, led her to under estimate certain seedy elements. These elements had an alternate design for the patriotic crime-fighter.

Freedom Broad was captured by a vile scientist named Dr. Digitalus. He is a key figure in research at the Department of Defense but, also has strong ties to Max Indeks and APEX Labs. Through his fringe science, he has been secretly and subliminally forcing Freedom Broad/American Amazon to ignore certain connections she has discovered between him and these organizations. Under his hypnotic spell, triggered by the word – “Sleeptime” – he has also been probing the heroine’s mind for information regarding her homeland, her Amazon clan and her long lost twin sister. He’s made a few breakthroughs migrating through Anna’s mental blocks that she has on these deep rooted secrets. He also has been brainwashing the heroine to be made unaware that these invasive procedures are being conducted on her.

Metrobay ties
American Amazon is an honorary member of the Superheroine Squad and briefly assisted in patrolling the streets of Metrobay after the events of the Night of the Drones left a majority of the members temporarily out of action. She also assists in brief assignments and patrols when Metrobay overtaxes the need of the squad.

It was only after her time with the other superheroines that she discovered, to her surprise and embarrassment, how outdated and derogatory her moniker had become. She promptly petitioned her passionate and devout groups of fans to assist her in coming up with a more appropriate name. She eventually settled on the more respectable “American Amazon”.

In a past event, American Amazon was investigating the suspicious activity of the criminal duo Dairy King and MilkMaid, having observed their abduction of Snowflake and retreat to their secret lair. Unfortunately, Dr. Digitalus was aware of her investigation and alerted Dairy King to her meddlesome snooping. American Amazon was ambushed by the devious duo and put back into a state of mindless compliance due to the hypnotic triggers Dr. Digitalus had implanted in her brain. She was subsequently stripped and affixed to the milking machines.

Of particular note during that event, it was discovered American Amazon was already predisposed to breast milk production, either through natural superhuman genetics or hormonal modifications under Dr. Digitalus’s control. The degree of her production was such that she was able to produce over 40% more milk than an average Metrobay female citizen. She remained under Dairy King’s care for a time where her contribution to the Tasty Treats business was no doubt appreciated greatly by her captor and master.

She was subsequently freed when the milking machines malfunctioned attempting to milk veteran heroine Ms. Metrobay and then heroically escorted several traumatized civilians out of the dangerous facility.

Presently
Dr. Digitalus is off in the Mediterranean exploring leads on Ainia’s Amazon family. Leads that he garnered from the information he obtained from her mental thought probing. In his absence, a freak accident allowed American Amazon to break free from the influence he had on her.

She was left unchecked in her zeal to shutdown R.O.P.E. activity in Capital City. This eventually incited Max Indeks and the Circle of R.O.P.E. members in Metrobay to act. They elected to send Madame Mynx in to handle the heroine and her activities. Mynx was able to trap and successfully capture the heroine and subsequently brainwash her into being a stripper whore named “Alluring Annie.” 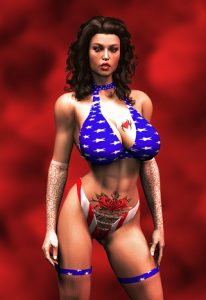 While she was about to become the permanent top billing at Mynx’s strip club, Max Indeks had a stroke of brilliance after applying the nano-leash to Andrea Carmichael a.k.a. Azure Avenger. He could raise his own superheroine team to challenge the Superheroine Squad in Metrobay. He collected an ensemble of captured & mind altered former heroines that were either in his fold or tucked in storage.  The former Amazon heroine was a top candidate. All Max had to do was hornswoggle her away from Mynx and once he did, she became the anti-heroine known as “Patriot Princess.” At this present moment in Metrobay, she is still serving in this capacity with the Apex Alliance. 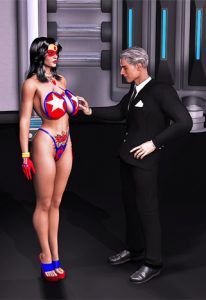 Powers
As an Amazon, Anna inherited her bloodline’s unique physiology. She was born with genetically superior strength, stamina, and physical aptitude, and years of physical training and indoctrination have formed her into a powerful fighter and skilled warrior in most forms of armed and unarmed combat. While she can hold her own in most fights, she also houses extensive knowledge of pressure points and will often attempt to subdue an opponent without harming them, if it is possible to do so. She has a residual telepathic ability that has degenerated some due to her curse and removal from her homeland.