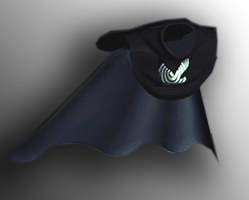 There remains much mystery about the Cloak of the Nightengale, a mystical counterpart to the infamous Black Hat. Unlike its counterpart, however, the cloak is an object of great good. In reality, the Cloak of the Nightengale is a resting place for Avia, a legendary heroine who eventually was seen as a goddess, and brother to an equally powerful but corrupt sorceror. Eventually and inevitably the two had their final battle where they destroyed one another.

When some brave adventurers eventually dared to enter the wasteland that resulted from the battle, they found the only remnants of the two powerful magic users; the Cowl of the sorcerer, the Cloak of Avia, and a Wand that pulsed with magical energy.

Avia had cast herself inside the cloak at the moment of her death to prevent her power from being misused and cast a spell upon it so that no evil creature could use her abilities to aid their evil crusades, whereas the Cowl was imbued with the spirit of her brother, changing form over time until the present where it is known as the Black Hat. The Cloak was then handed down throughout generations of strong, pure, and capable women until it arrived in the present day city of Metrobay.

When a woman wears the Nightengale Cloak, her spirit merges with that of Avia, creating a single woman from the two souls and merging their thoughts and emotions. Because of this, Nightengale’s image changes based on a single individual’s notion of what Avia looked like and represented. Swan Starling as Nightengale was one of the founding members of the Superheroine Squad and was active for many years before retiring due to old age and declining health. Desperate for a successor, she passed the mantle on to Samantha Sable.

Samantha, however, was unable to fully awaken Avia due to her sordid past. Samantha was still bestowed great powers and skill, and she tried hard to use her new powers and her status as an insider at R.O.P.E. to do some good for Metrobay. For awhile, it seemed like that would be the case.

However, Samantha’s cover was blown and she was forced to submit herself to the Modification Machine, turning her into the purely evil Lady Heartbreak. The Cloak of the Nightengale, unable to exist in the hands of an evil woman, found its way back to an elderly Swan Starling, who again found herself desperately looking for a worthy successor. The cloak, however, assisted her and found a place with another R.O.P.E. member, Robin Ravenwood. While Swan was skeptical of the cloak’s choice of hosts, she complied with its instincts.

Robin Ravenwood is the current holder of the Cloak of the Nightengale and has only recently begun to tap into the power of Avia. Robin is the first “true” Nightengale in almost six decades, but she intends on making a name for herself, like her storied and legendary predecessors before her.