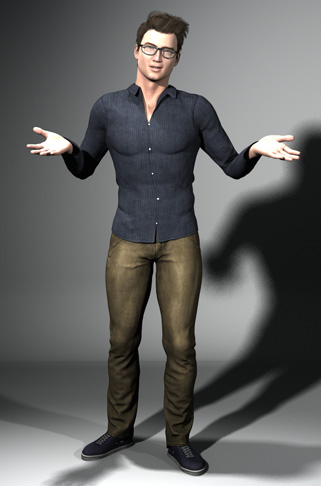 Real Name: Timothy Ingram
Age: 21
Height: 5’4″
Hair: Brown
Occupation: Student
Affiliation: Metrobay University
Tim is an upperclassman at Metrobay University and somewhat of a prodigy in the fields of mechanical and electrical engineering. He is the cousin of APEX Laboratories technician Michael Roland, and looks up to his elder relative as a role model despite Mikey’s spotty track record when it comes to making good life choices. However, Mikey has shown an interest in helping Tim in his chosen field, and occasionally sends Tim experimental APEX technology to play around with in his spare time.
One evening Tim was slogging through a mundane class when Professor Emeritus Gilbert Petto was announced as a surprise guest lecturer. Tim disregarded the kindly old Dollmaker with disdain until Gilbert introduced MONA to the class, and the stunningly sensual appearance of the lifelike doll immediately reinvigorated Tim’s passion for robotics – much to the detriment of his classmate April Andrews. Tim’s controversial encounter with Gilbert and MONA inspired him to construct his own humanoid female robot, which he has nicknamed “Henchbot”.
Tim attended a couple of the same MU classes as fellow Wildcat Jill Royal, though they did not run in the same social circles. However, Jill had no problem calling Tim out as a degenerate when he was seen streaking across the quad after his interaction with MONA went awry.