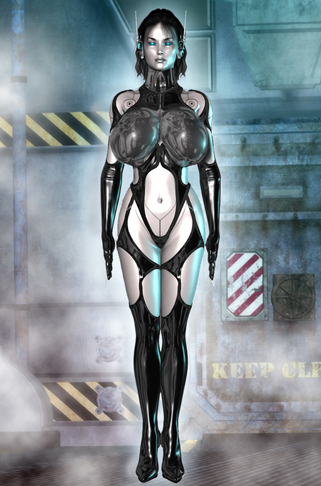 Wishing to give her a gift, but only knowing how to build and create automatons, Ted reasoned that he could gift his girlfriend her own servant android, painstakingly crafted in her image. The only thing his robotic creation lacked as a soul and mind of its own, and he had hoped that Belinda would be happy enough to contribute her own thought-patterns to the lifeless android.

Instead, Belinda mistook the gift as a sign of Ted’s unhappiness with her, an attempt to “improve” upon her flaws and mistakes by creating a fully-functional fembot that would never age, tire, complain, or challenge his authority.

Heartbroken, Ted washed his sorrows away at the local bar and picked up his former classmate Raquel Summers, using her instead as the template for his robotic creation. Instead, the mind-transfer transplanted Raquel’s mind into the robot entirely, which reshaped itself to match her more buxom physique. Caught between robotic programming and her own unrequited crush on Ted, Raquel in Belindabot’s body seduced the slightly inebriated Ted and the two made love. Unfortunately for them, they were spotted by Belinda, who spied on them and took it as the final sign that Ted held no genuine love for her.

In truth, Ted was torn up over the affair and the disastrous test with the mind transfer. He returned Raquel to her original body and would have apologized to Belinda more thoroughly had she not already taken steps to ensure his incarceration as her ultimate revenge against him. Ted was exposed by Belinda to Max Indeks and was apprehended by Alpha Woman for allegedly stealing company secrets and property.

Belindabot herself was hidden away from Ted and Max for her own personal interests, using her to reverse-engineer her own top-of-the-line brand of security robots, one of which she fashioned into the android Mechana. Belindabot herself was stored in a secret, secure location, only known and accessible to Belinda alone.