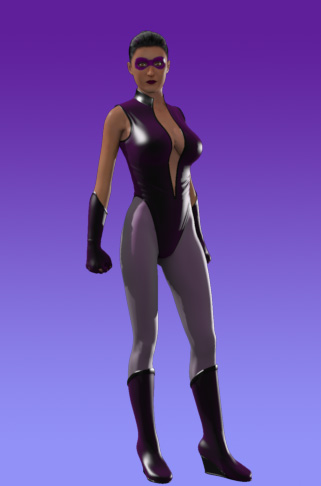 Shari Bahktavar is the youngest daughter of wealthy Zoroastrian Persian immigrants who settled in Los Angeles where her father is a successful film and television producer, her mother is an award-winning writer, her older sister is a singer and actress, and her older brother has become a successful music producer.

Despite growing up hobnobbing with the Hollywood elite, Shari was shy child who grew up into a young woman who much preferred being in the background as opposed to her far more visible parents and siblings. This translated into an interest in photography where she could ensure she was on the side of the camera she much preferred.

When she was fifteen, her psionic powers emerged, to her extreme discomfort. After several incidents in which she unintentionally influenced innocent people, she became very hesitant to explore her abilities but recognized she’d have to learn to control them so as to avoid future problems. Secretly, she began experimenting with her powers in order to understand them better, but found herself always tempted to use them for her personal gain. 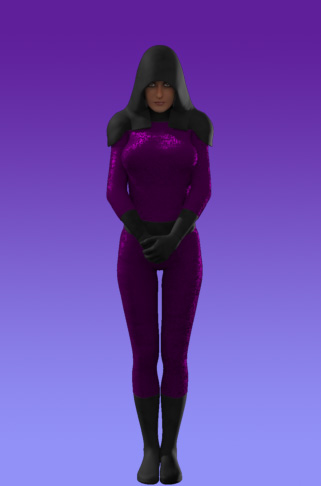 Upon graduating from UCLA with a degree in Fine Arts and having been a star volleyball player, Shari moved to Metrobay where she was relatively anonymous and began freelance work as a photographer and graphic designer.

After witnessing members of the Superheroine Squad dealing with an attack by a group of supervillains, Shari realized that there might be an outlet for her to use her powers so as to satisfy the constant “itch” they created when not used in an acceptable and unselfish way. Shari designed her own costume and had it made by a costumer in Hollywood who owed her a favor and had a discrete business providing costumes to superhumans on both sides of the law. Calling herself “Memetique”, she approached the Squad to request the opportunity to join them.

During an orientation session with Green Guardian, Memetique ended up in a brawl between members of the Squad and the minor villain known as The Technician. Thanks to Shari’s quick thinking, the heroines were able to identify a weakness in the villain and take him down. Following the incident, she was invited by Green Guardian to accompany her, Goldwing, and Valiant Woman on what was supposed to be a routine prisoner transfer from the city of Laythoff Haven. 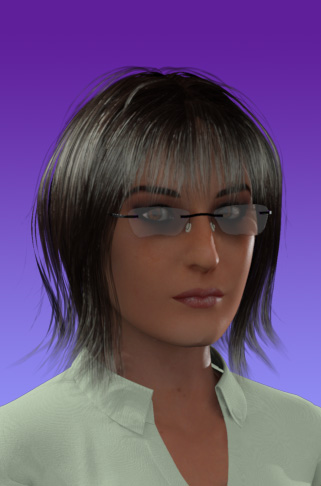 As a result of her transformation, Shari’s personality was altered slightly to make her more outgoing and confident., which was reflected in a new, more revealing costume and less hesitation in using her abilities. Whereas before she would remain unnoticed because she abhorred attention, Shari now chooses to remain unnoticed so as to study the people around her.

Memetique is a psionic with an array of mental powers that make her, potentially, the most powerful psychic in Metrobay.

Manipulate perception: Generally speaking she uses this to  “turn invisible” by having the subject simply not notice her, although it wouldn’t work over video or in a picture, and some people with unspecified mental strength could see her in a reflection. She also tended to use a low-level version of this in her personal life to suit her shy personality, but the recent boost in confidence as a result of the events in Laythoff Haven have caused her to use this less often out of costume. This skill also allows her to appear to be something/someone she’s not, either specifically or generically. She could walk through a room and people could see a “hot blonde”, although each person would have a different description based on what they perceive a hot blonde is, but she could also walk through a room and they’d think it was a specific person. The weakness in the latter case is that if the person didn’t *know* who Memetique was portraying herself as, the trick wouldn’t work and they’d perceive her actual appearance. She can also use the skill to alter other senses, such as making food taste differently or simply shutting everything down, locking a person in their own mind. Because her power affects the brain and not the sensory system directly, it would still work on someone with cybernetic eyes, or someone looking at her with a video camera in the same room, although the recording, watched later, would clearly show her. It wouldn’t work if she doesn’t know she’s being observed remotely, for instance over a security camera connected to an unknown remote monitor.

Read minds: When dealing with more than one individual simultaneously, she can only get a general impression of the group as a whole: being able to tell that a group is becoming hostile, for example, or losing interest. This does, however, allow her to sense when someone in a group has an abnormal mindset, because it will be different from the “average”. She would, for example, be able to sense an assassin in a crowd attending a political event because the thoughts would be different, but would have to work her way down to trying to identify them precisely. When she focuses on an individual, she normally can only sense what a person is actively thinking about at that moment, and it is entirely possible for her not to detect she’s being lied to by someone skilled in it. Going deeper requires more time and effort on her part, and to extract information requires her to essentially “interrogate” her subject’s mind, knowing what she has to look for and following linkages to get there, or to trick them into bringing the thought forward.

Telepathy: She can mentally communicate with other people, and can, in fact, link several together with herself acting as a hub. The distance limits of this, if any, have not been established. When using this, people linked with her have to actively choose to communicate: people won’t “hear” stray thoughts. An enhanced version of this, only capable of working over very short range, is to create a very strong link that can essentially for a gestalt mind from the combination of others, allowing the group to share the mental skills, perceptions, memories, and emotions of the others, but also sharing any weaknesses.

Mind control: She can, with enough effort and time, permanently alter a person’s memories, thoughts, beliefs and personality. How much effort it takes and how successful it is is directly proportional to how large the change is, how effectively the target resists, how much the target is aware of what she’s doing, and how subtle she is doing it. On a cruder level, she can cause one or more targets to have a compulsion to do something, with how effective the compulsion is dependent on how resistant the targets are to the suggestion, how many of them there are, and how sophisticated the suggestion is, with simpler suggestions being easier to enforce. Whether or not the target is aware of being influenced depends on circumstances. It would not, for example, be difficult for her to cause all the participants at a frat party to drink themselves into a stupor, and they would likely be unaware they were so influenced. Were she to attempt the same thing at a funeral, all the participants would know something was wrong and several would likely be able to resist.

Body control: She take control of a person’s body as a “puppet”, making it do what she wishes it to do (as long as the target itself is capable of it). In such a situation the target is aware of being controlled and can attempt to resist, with strong-willed people making it more difficult to achieve and maintain control. The greater the number of people she attempts to control at once, the cruder the control will be. With a single individual, she can cause the target to appear to be totally normal to a third party. With multiple people, she might be limited to causing them to drop their weapons while they’re exhibiting distress and yelling about being controlled.

Mental Stun: She can cause a person or group of people to lose consciousness immediately, essentially putting them to sleep for a period of several seconds to several hours. The effect of this prevents her from using any of her other abilities on them while they are unconscious.

Weaknesses: As noted, all her powers become weaker the greater the number of people she attempts to influence at one time. For the powers with more sophisticated effects such as mind control and alteration, she requires an uninterrupted period of time in order to do it, with any interruption forcing her to start over. This limits the usefulness of many of her powers in direct combat. She can be resisted (for at least a time) by sufficiently strong-willed individuals and can be resisted by assorted technological, magical, and biological mechanisms which defend against mental control. Certain drugs and other methods of altering brain activity in her targets can also prevent her from most effectively using her abilities. She has no influence over purely cybernetic minds such as that of LISA and Mechana, limited influence over minds that have technological enhancement of the brain itself such as that of Silver Satin or an active graybot, and will typically have no influence over supernatural entities such as ghosts and deities.