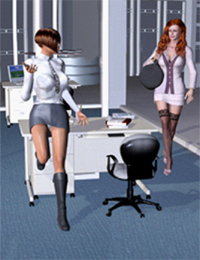 Metrobay’s City Hall is located within a massive municipal building in the heart of Metrobay. It is here that the great lawmakers and leaders of Metrobay have come to direct the course of Metrobay’s history, as they have for generations before and generations to come. The current mayor, Vanessa Turner, conducts the city’s affairs from her Hexagonal Office, seeking to run one of the busiest, largest, and arguably most corrupt cities in the free world.

Junior heroines RollerGrrl and DareDoll intern at City Hall during their free time away from Grrl Power and the Superheroine Squad. They work alongside Danielle Jordan, a fellow Metrobay University student and longtime admirer of Mayor Turner.