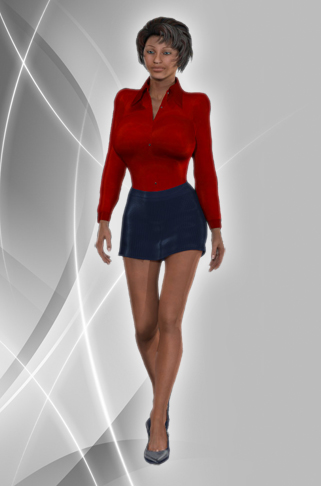 Name: Stephanie Wojeck Age: 39 Height: 5’7″ Hair: Black Occupation: Medical Examiner Affiliation: Metrobay City GovernmentDr. Steph Wojeck is the chief medical examiner for the City of Metrobay, and one of the most respected physicians in the entire region. Due in part to Metrobay’s strict anti-violence legislation homicides are at an all-time low, but the cases that do come into the M.E.’s office are usually strange enough to require her undivided attention. One such case arrived at Dr. Wojeck’s office when Jody Harrington, known in the underworld as “Nurse Perverse”, delivered the remains of a deceased criminal for the doctor to examine. However, the mentally unstable Harrington delivered only the subject’s eyes, brain, and penis for autopsy, and failed to notify Dr. Wojeck that he was formerly a powerful psychic with a rap sheet of sex crimes as long as his… well, you know. During the examination process the criminal Brain awoke and used his residual power to control Stephanie’s mind, and in turn directed her to recruit other beautiful women for him to enslave. The story is ongoing. Notable Appearance: Beauty and the Brain