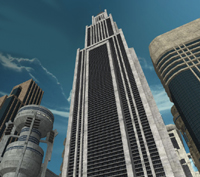 Wellington Tower is a large skyscraper in the heart of downtown Metrobay once owned by Vivian Indeks’ father, J. Walter Wellington III. Wellington and his younger brother Charles – the father of current Superheroine Squadand Grrl Power member Solaria – were at one time both members of R.O.P.E., but Walter left the Circle when he decided that its depraved agenda clashed with his own more wholesome vision of Metrobay’s future.

To everyone’s surprise, when Walter passed away he willed the estate to a previously unknown woman named Kaitlin Sinclair, who refused to sell the estate to Vivian and her husband Max Indeks. A second stipulation of Walter’s will was that Kaitlin take his place as a member of R.O.P.E., something the other members could not refuse without violating one of their most treasured bylaws.

Kaitlin Sinclair of course is in fact the heroine Pink Pussycat, and she transformed part of Wellington Tower into her base of operations, the famous Kitty Kat Den located deep beneath its mammoth structure. Located in the heart of the city, she would be able to be on the scene of any crime at a moment’s notice. She currently resides in the tower’s penthouse, where she hosts social events and keeps tabs on her fellow R.O.P.E. members.