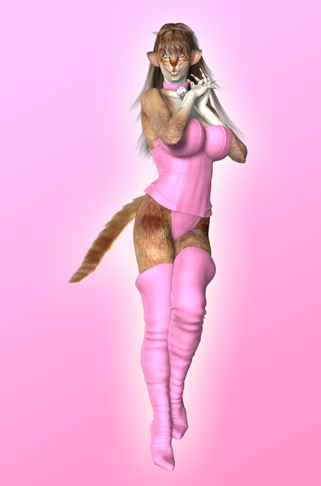 HISTORY: Angora was at first an obsessed fangirl of the famed Pink Pussycat and her Action Cats. She was so fanatic that she even got plastic surgery to look exactly like her favorite heroine. She turned this into her profession and got a job as a superhero celebrity impersonator (showing up at birthday parties, popping out of cakes, and such). She would devote hours of her day scouring the news for tidbits about her heroines and watching video tapes of them in action.

The first indication she had that she was anything special occurred when a squad of ROPE goons tried to abduct her. To their (and her) surprise, she defeated them all soundly by using kat-rate, just like her heroine! A little more experimentation revealed that she could now do anything any of the Action Cats could.

Excited, she managed to contact Pussycat and audition for the group. They were impressed with her skills but found her rabid fangirl attraction to them “totally creepy”. Sadly, this rejection shattered her worldview which turned her evil, swearing revenge against her former idol and her friends. In order to compensate for her lack of a Kitty Collar, she went to APEX and paid for an experimental technique that spliced feline DNA with her own, giving her physical abilities equal to the Action Cats but also causing her mental condition to deteriorate further by inflicting several cat-like mannerisms on her behavior.

Her first attempt to draw out the Cats involved taking Mayor Turner, reporter Janine Adair, and Alpha Woman hostage with Hypnotica as her mindless cat’s-paw. Her scheme was thwarted by MacroLass and Valiant Girl. She is now a resident of the Funhouse, watching her tapes 24/7… watching and waiting.

POWERS: Copy Cat has turned her obsession into an advantage by gaining such intimate insight into the subject of any of her studies that she can duplicate anything they can do, including their powers and skills, even if such abilities are not natural (for example, she has the same strength and agility as the Action Cats even though she does not have a Kitty Collar). The length of time she possesses these abilities are proportionate to the time she spends studying them and it is unknown how many heroines she can copy at a single time (the Action Cats considered a single entity because they all basically do the same thing). Her ability to actually impersonate someone is dependent upon the limits of makeup though her voice will be dead on.

It’s presumed that she has a friend inside of ROPE that provides her with the videos she needs. Strangely, in Japan SHE is regarded as a famous anti-hero with the Pussycat being her bumbling foe.

In addition to her metahuman ability, she’s also obsessively versed in superhero lore. From her acting career she has some skill at makeup and costuming.