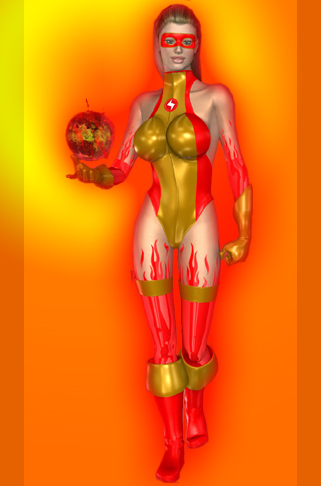 The daughter of rich and influential business owners, Alexis was a sickly child and spent her formative years in and out of Metrobay’s finest hospitals. Looking for anything that might cure their only daughter, the Wellingtons allowed Max Indeks and the scientists at APEX Industries to experiment on her at the genetic level in the hopes of finding a remedy for her numerous ailments. During the procedure there was a freak accident which altered Alexis’s DNA and years later manifested itself as an ability to manipulate most forms of heat.

Years after the accident, Alexis discovered what had happened to her and sued for negligence, winning a handsome settlement. She used her newfound wealth to put herself through college and live independently from her increasingly greedy and manipulative parents. Her father Charles wields great influence in Metrobay as a member of R.O.P.E., and it has been implied that the death of her uncle Walter helped create the state of affairs where APEX Industries was handed to Max Indeks and his wife Vivian (Walter’s daughter) while his estate, Wellington Tower, was willed to Kaitlin Sinclair.

The Wellington family tree has deep roots in Metrobay. Aside from her above mentioned father and uncle, Alexis is also cousin to Vivian Indeks and her sister Trixtress, and second cousins with the spoiled brat Babydoll. It is not known if Kaitlin Sinclair (a.k.a. “Pink Pussycat”), heir of the Wellington estate, and Alexis are related.

While attending classes on the campus of Metrobay University, Alexis joined Grrl Power, taking the codename “Solaria”. She and her roommate Snowflake have become best friends and regularly team up to fight crime on campus, despite their opposing personalities, family backgrounds, and superpowers. 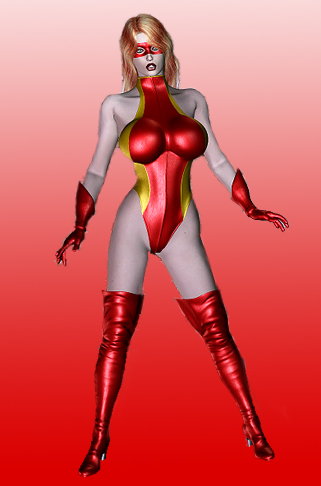 Solaria was later involved in the events of “Superheroine Squad”, falling victim to the brainwashing H.E.R. -TV channel and joining Sentius’s army of mindless drones. She inadvertently led her best friend Snowflake to a similar fate. Both were later freed by the efforts of the remaining Superheroine Squad members.

Recently, Solaria was captured and enslaved by her “uncle” Max Indeks with a control collar. He also revealed her father still has hope that his little girl will cast aside her childish superhero fantasies and become a proper R.O.P.E. girl, though even Max acknowledged that is unlikely. She was brought out to confront her friends on Max’s orders when his plans went south and helped ensure their capture and brainwashing. She awoke without any memory of the incident alongside Snowflake at Metrobay University.

Shortly thereafter, a string of disappearances, including that of prominent Squad heroines, caught the attention of Solaria, who was informed that they had been transferred the the alternate Platinum Earthuniverse by evil aliens. Fortunately, the aliens were susceptible to heat, a flaw Solaria was quick to exploit, and together with heroes from this alternate dimension, she traveled to the alien stronghold to rescue her friends. Ultimately she was successful and she returned to Metrobay alongside the heroines she helped liberate.

Along with Snowflake and other Grrrl Power cadets and Alpha Woman, Alexis went on vacation to the Sunny Side Resort, run by fellow heroine Honeydoll. However, Alexis and her friends were unaware that Honeydoll had been secretly brainwashed by the evil Ring Mistress and replaced with virtually identical robot clones. Shortly thereafter, Alexis was lured into a trap by one of the Honeydoll clones where she was captured and changed a nano doll and renamed Hottie Doll. After the rest of her friends were changed in a similiar manner, the five dolls were seen taking part in an online auction hosted by Nene Lee Heaters for interested R.O.P.E. bidders. She was freed alongside the others when Snowflake broke free and defeated Nene to ensure their freedom.

Solaria, despite her good conscious and noble intentions, does still possess a rather haughty attitude towards others, even towards her friend Snowflake. She nevertheless appears to be on good terms with most of the Superheroine Squad and is also a good friend of Blackout, whom she met during a misguided rescue attempt. She has, however, a passionate hatred towards Max Indeks, whom she believes deprived her of a normal life as well has having been a key influence in corrupting her father and mother.

Solaria has also had several adventures with Grrl Power against the likes of other villains, such as The Boyz. She served as backup during the rescue attempt at the end of Twisted Tales, though she still often must depend on the more experienced heroines for aid and support. Still, her take-charge, no-nonsense attitude has served her well on occasions, and she has served as Grrl Power’s unofficial “leader” from time to time, most notably during the time when both Superheroine Squad captains went missing.

Solaria is able to rapidly heat the air around her to incredibly high degrees and ignite flames at will. The only drawback is that her sphere of influence is very limited and she often must be within arm’s length of opponents to burn them. She can, however, combust the air into fireballs that she can hurl at opponents. Because of her flame-related abilities, she is also almost fireproof herself, but her body still cannot handle extremely hot temperatures, so she also limits how hot she allows her powers to be to prevent injuring herself or others. Her suit itself is composed of a specialized flame-retardant fibers, which were created after one of her earlier heroic efforts left her clothes in ashes and her in the buff.

But rapidly heating the air beneath her, Solaria is also capable of limited flight by riding the heat waves she generates, though she seldom demonstrates this power.