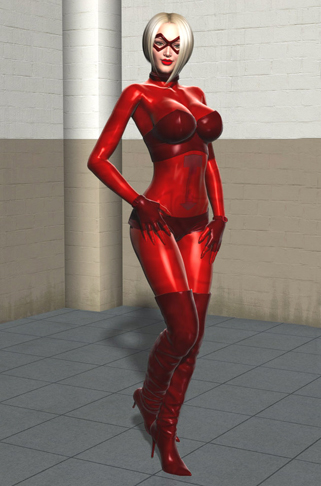 “Trixtress is my name. Humiliating captive superheroines is my favorite game. I get such a rush from watching superheroines try and fail to escape the sexually shameful  (and sometimes PAINFUL) predicaments I put them through. Mmmm! It gets me so wet! Pink Pussycat and Kitten are the most annoying superheroines. So, having those two feisty felines in my clutches gives me such a incredible rush of pleasure! Mmmm!!”

Sibling-rivalry is a common occurrence in families with highly competitive children, though Delilah suffers from a rather severe case of it. Delilah is the younger sister of Vivian, both of whom grew up in the lap of luxury, and the sister-in-law of Max Indeks. Delilah had grown up with a very deep crush on Max but was frequently frustrated and enraged that he seemed to prefer the company of her older, more mature and sophisticated sister. Delilah quickly developed a deep-seated resentment towards her sibling, a feeling that continues on to the present day.

She was distraught when Vivian and Max wed and was further enraged that upon her father’s passing he bestowed his company, APEX Industries, to Vivian and her new husband instead of to her. Though she still inherited an obscene amount of wealth and a large estate, she felt she deserved better than the “left-overs” she was given rather than the “banquet” her sister received. She was further humiliated when she was offered an extremely high position in the very company she believed she should be running, though she accepted the position to sustain her decade and lavish lifestyle.

Vivian had taken everything she felt she deserved: her parents’ love, her man, and her inheritance, and Delilah swore that their fortunes would one day be reversed and she’d be queen of Metrobay with her bitch of a sister subserviently licking her boot heel.
After this poor turn of fortunes, Delilah decided to drown her sorrow and self-loathing at one of Metrobay’s more popular bars, getting herself very drunk and losing most of her inhibitions, and waking up in bed with a hangover and a Max look-a-like. This one-night-stand resulted in the unholy spawning of Pristina Wellington, a spoiled, rotten bitch of a girl who takes after her mother like a fish to water. 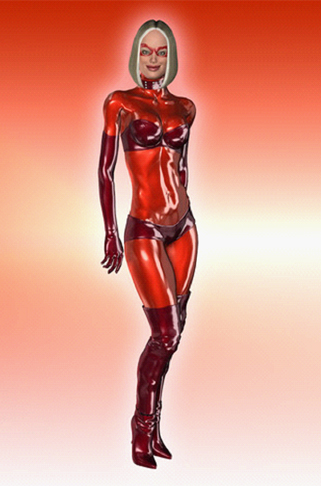 Due to her bloodline and familial connections, Delilah was an automatic shoo-in for R.O.P.E. membership, but her sadistic streak and perverse nature would likely have earned her a slot anyway. Taking the name “Trixtress”, Delilah transformed herself into an empowered and dominating mistress of trickery, kink, and ruthless ambition.

She quickly carved a name for herself as one of the more sinister and sadistic members of R.O.P.E. and has been described as a tad mentally unstable and perverted, even by R.O.P.E. standards. She has eagerly sought to prove herself worthy of being the queen of R.O.P.E. and often jumps at the slightest opportunity to capture, restrain, and humiliate any superheroine that meddles in R.O.P.E.’s affairs.

She’s often been partnered up with Syman Sayz, serving as his quasi-mentor and occasional lover. She is not above using her charms and sexual allure to rise in the ranks of the corporate and social ladder, and still seems to possess more than a passing infatuation with Max Indeks. She had developed an intense rivalry with R.O.P.E. minion Lady Payback, unaware for the longest time that she was in fact a double-agent and in reality the superheroine Nightengale. The ultimate opportunist, she has been shown willing to betray even her friends and family if it means advancing her criminal career.