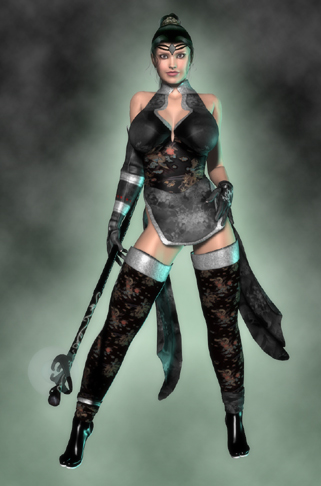 Mi Kiong Pyelak is a Korean superheroine and veteran member of the Gem Angels superheroine group. She was in her late teens when she was selected to inherit the Onyx gem of thunder from her predecessor, and she wasted no time in proving herself worthy of such responsibility.

It was around this time that a rich and powerful heroine arrived to establish a Korean branch of her company, and that was the first time Mi Kiong met Andrea Carmichael, who secretly was the famous and beloved heroine Azure Avenger. Seeking a mentor to help guide her and to learn all she could from such an experienced heroine, the two formed a partnership and spent several years growing to trust each other and elevate their powers.

However, their partnership crumbled through unspecified circumstances, and the two apparently did not part on good terms. Azure Avenger returned to the west to continue her business and hero career while Mi Kiong remained in Asia with the Gem Angels.

It was years later that Mi Kiong received a strange package from Andrea, claiming that she may need her help in stopping APEX Industries once and for all, but that she herself might have become APEX’s newest slave. Despite their past parting, Mi Kiong suited up to head to Metrobay, intent on tracking down her former friend and saving her… even if it means facing the woman she once respected most in the heat of battle.