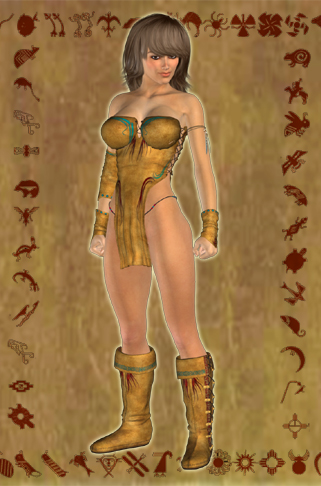 Ayasha Longshadow hails from a proud race of Native American warriors who settled in the prairie region of Hooter County. She grew up in the small community helping her widowed father plant and cultivate their crops, having an innate ability to help any crop she oversaw grow at an exponential rate.

Her ability to help plants and crops grow was ultimately tied to her own dormant super-genes, which activated her latent powers when she was of age. Ayasha grew to believe her powers came from the spiritual energy of her ancestors, and her new bursts of power caught the attention of Hooter County’s other main meta-humans, the West Sisters. Over time, she became good friends with them, seeing them all as wise surrogate mothers, while they in turn helped nurture her physical, mental, and spiritual growth until she became a beautiful, brave, competent young woman.

When she was old enough, she left her rural town for the big city of Metrobay, recommended to join the Grrl Power cadets under the West Sisters’ recommendation under the alias of Enormica. She simultaneously began to attend Metrobay University with a degree in horticulture. While she was there, she joined the new Sigma Somno Epsilon Sorority, unknowingly becoming a victim of Lorenzo Trance’s elaborate mind control scheme. Affixed with a hypno-gem on her chest, she was reduced to his mindless slave. Exasperating the problem further was Lorenzo’s untimely departure and later incarceration, leaving her under the gem’s spell but with no master to follow.

With her loss of will and control, Enormica lost control of her powers and began a mad rampage down the streets of Metrobay. Only the combined efforts of Ramrod and Valiant Woman were enough to free her from the gem’s control and return her to her proper size and frame of mind.

Ayasha is a proud and noble young woman who celebrates her heritage and is very much in love with nature and all its wild beauty. She partially detests the cold concrete and steel jungles of the big city, but has warmed up to the many friends she has made there. She is quite familiar with the heroine Ms. Metrobay, by way of her sisters, and was a good friend to the current villain Lonestar. Presently, she and her fellow Grrl Power cadets, particularly Goldwing, have bonded and become quite close.

Powers
Enormica can alter her body size at will, either to shrink or to grow to incredible sizes. Increasing her size simultaneously increases her mass and strength, but has the negative effect of diminishing her cognitive thoughts. Alternatively, lowering her size can boost her mental abilities but this is offset by a significant loss of strength and mobility. Her growth powers can at times be transferred to other people and objects, an ability she found useful when planting, growing, and harvesting crops.