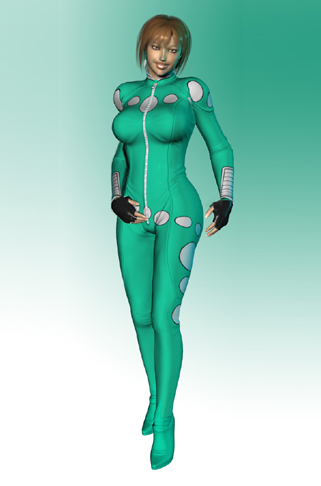 Terra Mona Creed was a brilliant, if eccentric, inventor and self-proclaimed “evil genius” that, like many sharp and inventive minds, held tenure at APEX Industries, where her vast intellect and twisted enthusiasm was put to good use by Max Indeks.

Terra hero-worshiped fellow scientist Doogan Tinker and was his understudy during much of her earlier years. She was instrumental in helping him create the first series of Modification Machines, which were used on heroines Goldwing and Knyght Fighter.

Her zeal and loyalty to Doogan waned, however, when the modifications done to the two heroines abruptly disappeared and they reverted to their original forms. It was discovered this was due to a human calculation error, of which Doogan was blamed and fired for. Terra was then unceremoniously appointed as his successor and she promptly began rectifying his oversights.

Terra created the second series of Modification Machines, with the assistance of fellow super-genius Preston Prescott. This were used successfully to create the bombshell Ginger and, unbeknown to her, the hero Adonis.

Despite her success where her mentor had failed, she became convinced her genius had more to offer and she began independent research in the fields of nanotechnology and techno-organics. She genuinely believes that the power to alter human beings into whomever and whatever she desires is beneficial to mankind and will stop at nothing until her dreams and ambitions are realized, even if that means crossing paths with some of the most powerful and skilled heroines Metrobay, and the rest of the world, has to offer.

She began fulfilling her goals by kidnapping young women and using them as guinea pigs to test her newest devices on. Once her crimes garnered too much attention, she fled to the city of Liberty Grove and lured the heroines Emerald Tiger, Kat Krusader, and Duality Dame into a trap. She then used her captives to test out her new nano-modifiers. Pink Pussycat, who had followed her from Metrobay, became another unwilling test subject and was captured and mutated into a bizarre cat-human hybrid. She also captured her old lover, Clarissa Calico, who was the heroine known as Fluffy.

Sometime later, Creed gained control of the Sunny Side Resort Hotel owned by Bea Flowers (Honeydoll). She replaced Honeydoll with an android duplicate, who would later choose the name Galatea, and captured several heroines, intending on selling them off into slavery, and was accompanied by her mind-controlled wife, Clarissa Calico-Creed. Her scheme was undone when Snowflake broke free of her control, however Honeydoll had already been sold to Irene McNorm and it was not realized that the Honeydoll acting in her stead was Galatea.

It was eventually revealed that several years ago Terra Creed had discovered the genetic manipulation that had resulted in Miranda von Ick, the daughter of Feelix von Ick, assuming the identity of Clarissa Calico. Creed had not consider herself ruthless enough to do what was necessary to save her beloved Clarissa, and so subjected herself to the Modification Machine. However, she made a mistake and overdid the change in personality, causing her manic behavior and mad scientist persona. Despite this, she successfully found a way to free Miranda/Clarissa from von Ick’s control, however her interference caused von Ick to toss her into the timestream in anger, where she was lost.

Von Ick’s subsequent alteration of the timeline erased Terra Creed from history, however she herself survived, finding herself in another time and place and making a new life for herself as “Rissa” with the alien woman who had discovered her.