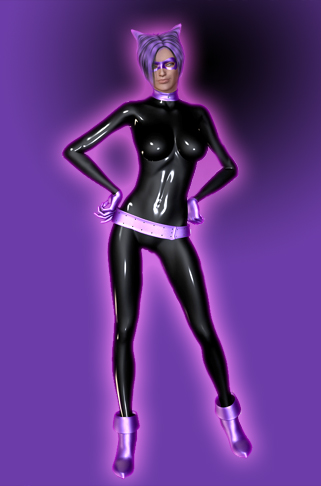 Troublina is a girl that just wants to have fun. Unfortunately Troublina’s idea of ‘fun’ almost always involves mischief. True to her name, she never fails to get mixed up in some kind of misadventure. Her calamity prone nature makes it extremely hard for her to make friends, even with the most patient of individuals.

Although her primary trade is catburglary, she has helped the Superheroine Squad at times as well as worked with the League of Villains. No one is quite sure where exactly her loyalties lie, if she has any loyalties at all, and she has her fair share of allies and enemies on both sides of the law. She seems to show up wherever trouble can be found. Her only true enemy seems to be the villainous Trixtress who continues to blame Troublina for past misfortunes.

Max Indeks has in the past hired her to work for R.O.P.E., with great wealth accompanying the offer. Troublina, either tempted by the money or hungry for acceptance, took him up on the offer. Her employment was short lived when she discovered how twisted and perverted R.O.P.E. members were expected to be, for their sex games and odd kinks held no interest for Angie.

When Max captured and bound up his arch-nemesis Pink Pussycat, Angie could stomach it no longer and decided enough was enough. She freed Pink Pussycat, an act that was unknowingly being viewed by R.O.P.E. security cameras. Both were recaptured, and Troublina’s R.O.P.E. privileges were revoked, resulting in her becoming another victim in Max’s sick bondage games. Though Pink Pussycat managed to escape, Troublina wasn’t so lucky, and was left under the vengeful eye of Trixtress.

Troublina managed to escape eventually and resorted to her criminal ways, doing odd jobs and engaging in petty theft to keep herself busy. She later caught wind that the City State National Bank was going to be robbed and decided to see what she could pilfer during the ensuing chaos. However, she had the misfortune of running into Trixtress again and found herself captured as a hostage and used as leverage against Pink Pussycat.

Pink Pussycat fell for the trap and was shrunken down to the size of a doll via the mystic powers of the Minimizer and his enchanted amulet. However, while Trixtress was toying with her new plaything, Troublina managed to seduce Minimizer and escape with his amulet, intent on selling it on the blackmarket. She later ran into Nightengale, who attempted to apprehend her, but the heroine found herself inadvertently captured by Trixtress and Chef Pasty as well, leaving Troublina free to make off with her stolen possession.

Unfortunately for her, Troublina was tracked down by Minimizer, who recaptured the amulet while she was preoccupied and entertaining fantasies involving her apparent crush, the superheroineKitten. Troublina was then shrunken down and held captive with the other shrunken heroines. Troublina, however, managed to seduce Minimizer yet again, stealing the keys to her cuffs, and then proceeded to free the remaining heroines.

Later at some point, Troublina was arrested for breaking into the Superheroine Squad HeadquartersHypnotica. Troublina was told to head straight back to Max, but ignored her instructions and struck out on her own again. However, her bad luck continued when the heroine Snowflake spotted her and mistook her for the culprit behind recent mind control shenanigans. Troublina tried seducing her would-be captor (basing it off of what she viewed Hypnotica do when she ran into her boyfriend Officer Mick Jones), but her seductive skills failed to buy her any leniency and she was apprehended. (supposedly under Max Indek’s orders), but was rescued from prison by the “heroine” 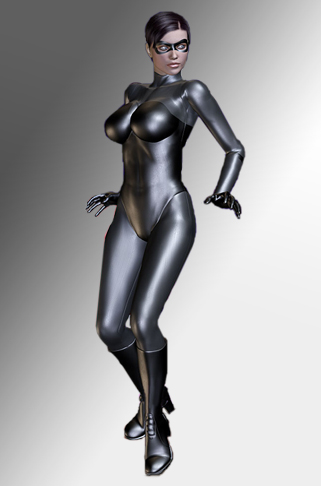 In a rare twist of good fortune, Snowflake and Troublina stumbled upon Hypnotica and Valient Grrl and managed to barter her freedom in exchange for assisting the heroines in an investigation ofAPEX Labs, where apparently she is aware of highly classified information that could prove beneficial in the Superheroine Squad’s war against R.O.P.E.

Troublina proved true to her word and led the heroines to a secret cloning facility that Max had set up, leading also to the revelation that both Hypnotica and Valient Grrl were clones themselves. Max confronted them, sending security droids to attack them, and successfully detained and brainwashed Hypnotica, who in turn used her hypnotic powers to enslave the remaining heroines, Troublina included.