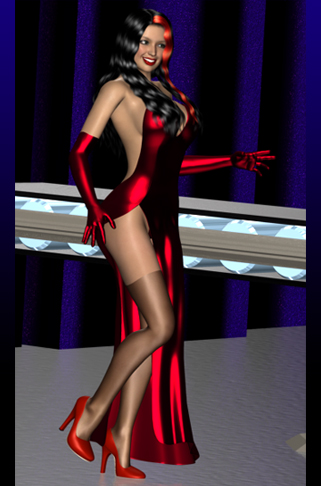 Melodia Loire is one of the most coveted women in Metrobay, a highly popular lounge singer with a golden voice, highly praised by the Daily Metro for her sultry sounds and memorable songs.

Part of that praise can be attributed to a secret superpower Melodia developed in her youth. During her high school years in choir, Melodia discovered her voice had the ability to seduce and control the minds of anyone within earshot, regardless of age or gender.

Unlike many of her gifted contemporaries, Melodia decided not to follow the path of virtue and instead used her ability to indulge her wildest fantasies and desires, elevating her status in Metrobay and acquiring all the wealth she ever dreamed of owning. 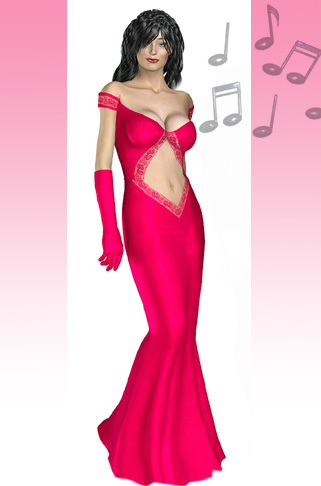 The power eventually went to her head and the wealth, the fine dresses, the fancy dinners, and the movie star dates were no longer enough. She needed more, and the Circle of R.O.P.E. was more than willing to indulge her overblown ego.

In return for her unique and highly demanded performances exclusive to R.O.P.E. members, Melodia was allowed unrestrained entertainment at the expense of the Superheroine Squad. She was partnered with The Maestro, a similarly gifted musician with also possessed a hypnotic musical device, creating a harmonic tour de force of beautiful, symphonic perversion. Her musical debut as the supervillain Melody has gotten rave reviews from the Daily Metro once more, calling her one of the most “beautiful and alluring villainesses” and the “voice of villainy”. An extremely pleased Melody can only hope her new career continues its unstoppable rise in recognition… until all of Metrobay is throwing her roses in complete and utter obedience.

Whether the revelation that Melodia is actually the mother of Emily Easton will change things has yet to be determined.

Melody’s voice carries a unique pitch and frequency, one capable of controlling human minds. It’s an ability she has exploited for years and has been a danger to heroines for quite some time. Her powers are not without drawbacks, since she cannot sing at all without entrancing her listeners, which limits her appeal as a genuine performer. Similarly, if captured, she is often gagged to prevent her from using her abilities.

It was believed that Melody was only in her 30’s but it was recently shown that she has had at least one child under an alternate name at least 3 decades ago.  How old she actually is, how many personas she’s assumed over the years, and how she acquired this extended lifespan is currently unknown.